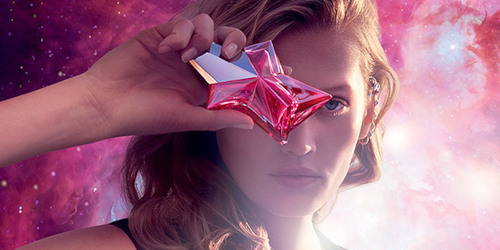 When I learned that Thierry Mugler had passed away on January 23, I recalled my feelings the first time a sales associate offered me a sniff of the original Angel in a department store: I was intrigued, repelled, and somewhat confused. I didn't buy it, but it lingered in my mind and I kept trying it whenever I spotted that distinctive pale blue star bottle on my shopping rounds.

In the late 1990s and early 2000s, I'd occasionally smell Angel on another woman on the subway, at a party, at a professional conference, and sometimes it smelled glorious on someone else, and sometimes it didn't, but it was always distinctive and not quite like any other perfume...until so many new fragrances suddenly started to smell more and more like Angel, and they just kept proliferating at every tier, from high-end niche to mainstream, not to mention candles and body products.

I did eventually purchase a small bottle of Angel, which I still wear sparingly on occasion — I admire it intensely, as an artistic achievement, but it just isn't me. I've traditionally gravitated more towards Angel's flankers. I liked the Garden of Stars, I wear Angel Muse periodically, and I still adore Dis-Moi, Miroir, from a limited edition collection that's long since gone. I somehow never tried Angel Nova when it was released in 2020 (oh, right! the pandemic!), so I blind-bought a travel-size spray to mark Mugler's passing and this moment in time.

The Mugler website describes Angel Nova as "a captivating, super-feminine fragrance that exudes instant pleasure and confidence. . . . born from the unsettling fusion of fruity delight, an exclusive Mugler rose, and vivid, modern woods. The dazzling encounter of pleasure and self-assertion...," etc. Its composition, developed by perfumers Quentin Bisch, Louise Turner and Sonia Constant, includes notes of raspberry, lychee, rose, Akigalawood and benzoin, and there's some language about the rose being "achieved through the sustainable process of upcycling, or double distilling rose petals."

Basically, Angel Nova is flirty and cheeky and fabulously fake. It starts off smelling just as "hot pink" as the glass of its modified star bottle, with a vibrant raspberry note. I happen to love a big raspberry intro — it's the reason Givenchy Hot Couture is a guilty pleasure for me — so I was instantly aboard the Angel Nova train. The berry mellows after an hour or so, and Angel Nova turns into a neon-bright fruity-rose scent with some vanillic underpinnings, still very much to my taste on a cold day when I'm working from home and need a pop of olfactory fun to keep me company. Is there a connection with the original Angel? Less so than some other flankers, like Muse or Eau Sucrée, but it's there. The link is patchouli, which shows up in Angel Nova via Akigalawood, a Givaudan molecule that smells like a sheer, peppery variant of patchouli without patchouli's characteristic earthiness.

One day when I decided to wear Angel Nova, I sprayed it on, worked at my desk for a couple of hours, then went out to do a local errand. On my walk home, I removed my mask and got a refreshed inhale of the Angel Nova wafting from my wrists into the cold air: the red berries, the jammy rose and a sharp, contemporary patchouli. For a split-second, Nova's orchestrated clash of something almost-too-sweet and something weirdly woody felt very Angel. Then my nose readjusted and Angel Nova was back to being a fragrance that pleased me while still feeling a bit familiar, not just for its association with its groundbreaking big sister, but because of the very fact that it's not groundbreaking, if that makes sense.

I just watched a TV show that ended with a character finding themselves sucked through time and trapped in the mid-1990s. While there are some aspects of that era I'd like to re-live (shopping, music, my younger physique), I know you can never step into the same river twice. No one will ever be able to experience Angel today as people initially did in the 1990s, simply because it has reshaped the perfumery landscape over the past thirty years. That makes me feel grateful and sad at the same time. I'm glad Angel exists, even if I could never quite make it "fit" me, and I hope Monsieur Mugler is spritzing himself lavishly with Angel in some starry afterlife. 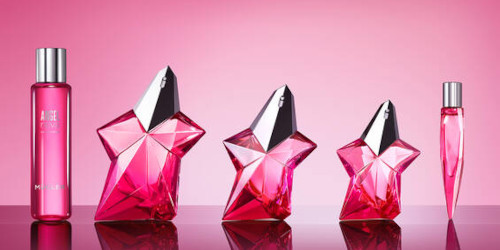 Do you have a favorite Angel flanker from the past or present, or any of your own Mugler memories to share? Feel free to comment!