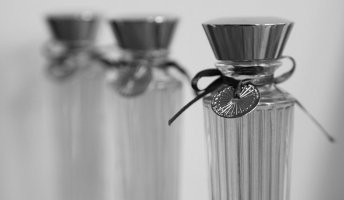 India’s beginnings are shrouded in the mists of antiquity, its earliest history known only through legend. Yet the modern reality pulses with vibrant life and youth. Each encounter with the country’s rich cultural heritage leaves one breathless and yearning for more.

This diversity has inspired Neela Vermeire to create and dedicate the first trio of fragrances to India – her native country – while living and working in Paris, her adopted city and perfume capital of the world.

Trayee ~ "The Vedic tradition suggests that Wisdom is eternal. It exists within the eternal fabric of consciousness itself and is uncreated. It is the essence of India, the beginning of the journey. It is a eulogy, a hymn to the idea of India, an act of deepest reverence for the traditions of the mother country. The divine origin of the first three Vedas - Rig, Yajur and Sama - suggested the name of the perfume: Trayee (pronounced ‘try-ee’, meaning ‘the triad’). Trayee is a complex fragrance that represents the boundless spiritual landscape of the great Vedic period, which started many centuries ago: its intricate rituals and temple ceremonies, ayurveda, the universe of yoga and the holistic quest for knowledge..." With blue ginger, elemi, cinnamon, ganja effects, blackcurrant, basil, jasmine, cardamom, clove, saffron, sandalwood, vetiver, incense, sandalwood, patchouli, myrrh, vanilla, cedar, amber, oud and oak moss.

Mohur ~ "Known as Mehrunissa, the most powerful Empress of the Mughal dynasty, Noor Jahan was the favorite wife of Emperor Jehangir. She was the true power behind the throne while her husband lived, so much so that after his death her male relatives had her sequestered (in comfort!) for the rest of her life. In her confinement, she devoted herself to the art of perfumery as it had been passed down from her mother. Mohur is a rose-based fragrance, a combination of opulent moghul rose perfumes and a distinguished spicy leather bouquet that can only be imagined during a high tea after a polo match. To capture this moment, Mohur has been created as a refined rose-oudh alliance that pays tribute to Noor Jahan’s power and talent. It exemplifies the nearly 500-year span of India’s history that was shaped by a succession of influences from the outside world..." With cardamom, coriander, ambrette, carrot, black pepper, elemi, rose, jasmine, orris, aubepin flower, almond milk, violet, leather, sandalwood, amber, white woods, patchouli, oudh, benzoin, vanilla and tonka bean.

Bombay Bling ~ "This joyful creation embodies every aspect of the very modern, colourful, eclectic, esoteric, ecstatic, liberal, happy side of buzzing India, a world economic power, where nothing is to be taken for granted, where the underbelly of the big city combines with the glitter of Bollywood on the vast sandy stretches of Juhu Beach and the Queen’s Necklace. Fortunes are made and lost on the Bombay stock exchange and gambling dens of Mumbai. Abandon yourself to the nightlife as dawn breaks over the city. There is nothing like it and there will be nothing like it. Welcome to a vibrant new India!" With mango, lychee, blackcurrant, cardamom, cumin, cistus, rose, jasmine, ylang-ylang, white floral accord (tuberose, frangipani, gardenia, patchouli, tobacco, white woods, sandalwood, cedar and vanilla.

Neela Vermeire Créations Trayee, Mohur and Bombay Bling will be available in 55 ml Eau de Parfum (in the refillable bottle shown above) or in 10 ml discovery sets.

Disclaimer: Neela and I have never met in person, but I've known her for many years via the MakeupAlley fragrance board.