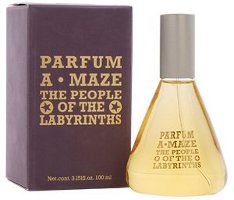 The People of the Labyrinths launched Luctor et Emergo, their first fragrance, in 1998. Luctor et Emergo is now, I should think, officially a cult classic, having first been nominated for cult status by Style Magazine in 2002. There are plenty of people who don't love it (it wouldn't be a cult scent otherwise, right?), but those of us that do are rather besotted with the stuff, to put it mildly. It is one of few fragrances that I am still as enchanted with today as I was when I first smelled it.

Nine years, of course, is rather a long wait for a follow-up, and so it is no surprise that A.MAZE (and I'm just going to go ahead and refer to it as Amaze for the rest of this article) was released to more-than-usually heightened expectations. The notes include henna, saffron, Taif rose, orange blossom, Wardia rose, agarwood, sandalwood, musk and civet.

The top notes of Amaze are a a gorgeously rich blend of saffron and rose, with the henna adding its characteristic, hard-to-describe smell: a bit earthy, a bit herbal. The agarwood adds depth, but it does not, as it does in both 10 Corso Como and Montale Aoud Roses Petals, come out fighting at the start, so you won't have to wait for the medicinal haze to settle before you can inhale deeply. And if you love rose, you'll want to inhale deeply: the rose here is vivid and bright, yet very full-bodied; there is nothing in the least dewy (or girly) about it.

The dry down is woody and deep, and it stays very rich; still, it isn't heavy, and to my nose, it isn't quite dark. There is a whisper of orange blossom, but it is primarily a rose scent, much more so than the Montale or 10 Corso Como mentioned above. There is just the right touch of civet: Amaze has a satisfying oomph, but isn't so animalic that you'd have trouble wearing it to work.

So how does it stand up to Luctor et Emergo (pardon the pun)? Well, the thing about Luctor et Emergo is that while it probably doesn't qualify as a Great Perfume, it is eerily evocative, more so than almost any other scent I know. I think of it as more of a mood than a perfume. Luctor et Emergo is also very much an original — it is a little weird, and just doesn't smell like anything else out there, and in that sense, is a good fit with the brand's ethos.

Amaze doesn't quite reach those heights. Don't get me wrong, it is a lovely perfume. I want a bottle. Very much. But it isn't particularly evocative, there is nothing even vaguely weird about it, and I wouldn't call it wildly original, in fact, over the past week, I've worn it next to at least six other perfumes that seemed to invite comparison. It doesn't smell exactly like any of them, so unless you're the sort of person who would only buy one rose scent (horrors! you must have at least a few?) it is very much worth trying.