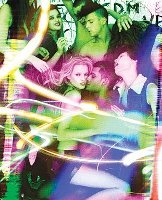 If you're old enough to remember the days when Calvin Klein was truly shocking (think Brooke Shields! think Obsession!), you're probably older than the target audience for the new CK One Shock for her. CK One Shock for her (along with its male counterpart, CK One Shock for him) is a flanker to the unisex CK One, which was innovative, if not exactly shocking, when it was launched in grunge-era 1994.

The Calvin Klein website describes CK One Shock for her's composition as having top notes of passionflower, pink peony, and poppy flower; mid notes of liquid chocolate accord, blackberry, narcisse, and jasmine; and base notes of vanillin, patchouli, ambers, and skin musk. It's billed as a "juicy floriental," but it's really more of a fruity gourmand. As you can tell from the list of notes, it does not have anything in common with the original CK One's green-citrus freshness. On the other hand, you won't confuse it with Schiaparelli Shocking, either. CK One Shock for her opens with a tart, synthetic blackberry note and possibly just a hint of lemon. The heart of the fragrance is more fruit, of the pink-and-purple variety, if you know what I mean: sort of plummy, sort of currant-like. The base of the fragrance emerges after a half-hour or so and blends with the purple fruits. It's the kind of dry, powdery cocoa accord that, as Kevin recently noted, seems to be appearing everywhere these days. The "skin musk" of the dry down is very light and clean.

Overall, CK One Shock accomplishes what it sets out to do: it's a flanker for a popular youth-oriented fragrance, geared towards female customers in their teens and twenties who enjoy sweet berry-dessert fragrances but might be looking for something a little higher-end than Bath & Body Works. It's smoothly blended. It's reasonably priced. And, despite its gourmand aspect, it won't overwhelm the wearer (or anyone she passes in her high-school hallway), because it has low sillage and mild staying power.

The oddest thing about CK One Shock, for me, is how dated it already feels. Its video and print ads resemble a rave party from the mid-1990s. Its fruit-flower-musk combo is yet another olfactory grand-child of Thierry Mugler Angel. Even the hot-pink lettering of the bottle design reminds me of the "Stephen Sprouse for Louis Vuitton" collaboration (originally launched in 2001, reworked in 2009), in which Vuitton's classic bags were "spray-painted" with the kind of graffiti-style writing that Sprouse had started using back in the 1980s. Then again, for many members of the CK target audience, the 80s and 90s might have the romance of something they weren't quite old enough to experience firsthand.

Finally, CK One Shock left me thinking how much more difficult it is to shock the average consumer in 2011 than it was in 1994. Well, I was wearing romantic fruity-florals (Romeo di Romeo Gigli) and transparent green fragrances (Kenzo Parfum d'Été) in the mid-90s, so maybe shock value was just never my thing, even then. Here's a poll-type question or two to round off this review: what fragrance were you wearing in 1994? or, have any fragrances shocked you recently?