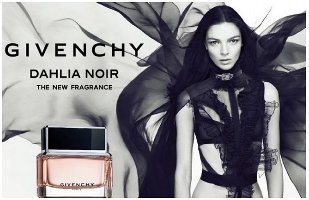 A fantasy flower—The first fragrance developed under the creative direction of Riccardo Tisci, Dahlia Noir embodies the mysterious, singular radiance of a woman's graceful power. Dahlia Noir is both feminine and sensual thanks to its floral and powdery facets, but also powerful and captivating with its woody base notes. A Couture fragrance all in pure lines, a return to supreme luxury. The quintessence of the Givenchy Style.1

At times, it is almost too perfect (or just boring?) how neatly fragrance brands — and my tastes — stay inside their boxes. As I've said here umpteen and a half times, I don't follow fashion, but I do think nearly anybody who pays any attention at all to perfume could smell yesterday's subject, Prada Candy, and today's, the new Dahlia Noir from Givenchy, and say which was the Prada and which was the Givenchy, even if they'd read nothing whatsoever about either fragrance. And I'm just as predictable to anyone who reads here regularly: I didn't expect to like the Prada, but I did, and I didn't expect to like the Givenchy,2 and I didn't.

Likewise, I loved the silly Prada Candy commercial, but the commercial for Dahlia Noir left me mostly cold — the shots of Mariacarla Boscono's dress billowing in the wind are mesmerizing, but most of the rest of it looks like it's trying way too hard to be sexy. The parts that weren't trying to be sexy (those long moments when she's just walking across the floor) struck me as plain dull.

I might say the same for Dahlia Noir's juice. It's a modern chypre (aka woody oriental). The opening is a short-lived whoosh of tropical fruit (guava?) and citrus. The heart is a medium weight fresh peppered floral; in keeping with the references to the fantasy flower, perhaps, it doesn't smell like any flower in particular (the notes: pink pepper, mandarin, mimosa, rose, iris, patchouli, sandalwood, vanilla and tonka bean). The base is a dry woody-musky patchouli, very clean and smooth, and made even more of-the-moment by a soft, powdery finish. There is something in the dry down, I don't know what, that smells ever-so-faintly medicinal; sometimes I noticed it and sometimes I didn't.

Don't get me wrong, I didn't hate Dahlia Noir, not at all. I wore it for several days next to Prada Candy, and I found it wearable and pleasant enough. It's competently done, and it's not unsophisticated. I wouldn't mind smelling it on someone else. It just didn't move me, and I liked it better when I wore it on its own— it couldn't compete with Candy. Candy smells fun, and I like to think that perfumer Daniela Andrier had fun making it. The Dahlia Noir is more conventional. It smells like the perfumer was ordered to include elements from all the latest successes (fruit, we need more fruit! make it powdery! give it a masculine side!) and to make it sexy, but keep it clean — nothing skanky enough to justify Boscono's suggestive writhing and bondage-wear in the commercial. (Whatever happened to the notion that Americans like clean, but the French like a little skank? There's no skank in anything on department store counters these days). Oh, and they were told to make it smell expensive, but not to spend too much on the materials. And then, somebody did what they were told, and they did a good job of it. It most certainly doesn't smell like a Prada, but it could as easily be from Gucci, or Yves Saint Laurent, or any of the other same-y mid-to-upper "luxury" designer brands.

If you liked it better than I did, do comment! Would also love to hear comments from anyone who has tried any of the new fall fragrances we haven't covered yet. It's going to be hard to keep up with all the new launches this year. 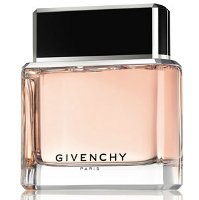 1. From the description at Neiman Marcus.

2. By way of explanation, I thought I'd add that I didn't expect to dislike Dahlia Noir because of anything I'd heard about it, or anything in the press materials. I expected to dislike it because I like so few Givenchy fragrances. Eau de Givenchy (1980) and Organza Indecence (1999) are big favorites, but for the most part, their modern output leaves me cold. They do a great job with the Harvest series, admittedly — I wish they'd do a harvest version of a fragrance I liked.