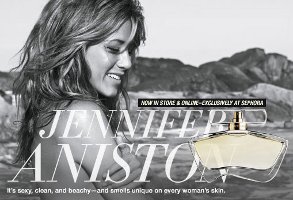 Jennifer Aniston's eponymous fragrance, which debuted last year in the UK, has finally reached US shores. I am better placed to talk about it than I am with many celebrity fragrances, insofar as I actually know who Jennifer Aniston is — doesn't everybody? She's one of our more likable celebrities, I should think, although whether that will translate into major sales remains to be seen, and she did not get a contract with one of the biggies, like Coty or Elizabeth Arden or Estee Lauder. Her fragrance was made with Falic Fashion Group, who also holds the fragrance licenses for Perry Ellis and the recently launched Original Penguin.

As many of you will remember, Aniston, like many celebrities who are gearing up for a fragrance launch, started out by talking about how she didn't really like strong, perfume-y fragrances; fragrances she particularly named as too strong included Miss Dior, Cacharel Anaïs Anaïs, Hermès Calèche and an unnamed body splash that was probably Jean Naté. Her fragrance, which was at that time to be called Lolavie (the name got dropped shortly before the launch), was to be "sexy and clean" and "floral, but not too flowery", and (my personal favorite) to smell "unique on every woman's skin".

The scent itself, which includes notes of citrus grove accord, rose water, night blooming jasmine, wild violets, Amazon lily, musk, amber and sandalwood, is meant to recall night blooming jasmine on a warm California evening, and salty air and tropical oils, and long sunny days on the beach. Aniston grew up in California, and the finished product has a distinct resemblance to the fragrances that I think of as the "California perfume oils"1 — I described them in 100 Fragrances Every Perfumista Should Try as "easy-to-wear, sunny little blends of sweet white florals with laundry-clean musk". Jennifer Aniston is a kissing-cousin to those scents (numerous reviewers on MakeupAlley and Sephora mention its similarity to Child especially), mostly in the same vein but perhaps not quite as sweet, perhaps not quite as clean.

The start is citrus with a fruity jasmine, and for a brief time it is rather alarmingly strong and sweet. I thought it teetered quite close to "too flowery" — not for me, mind you, but I should think the top notes might well put off young women spraying it on blotters in Sephora. Fear not, it settles quite rapidly, and then it's a clean jasmine, mostly sheer, with very light touches of other tropical flowers, and a warm-ish, clean musky-woody finish that isn't nearly as aggressively laundry-detergent-like as I feared it might be, just clean, maybe slightly soapy. It isn't at all what I'd call beachy, but many consumers (again, at MakeupAlley and Sephora) apparently disagree with me. It almost doesn't matter, because just when you're considering the dry down, the whole thing disappears right off, leaving only the faintest trace of a bland floral musk.

It's just fine, if not particularly exciting or long lasting. Still, I'm happy to pronounce it the best celebrity scent of 2011, so far, which only means I like it better than Katy Perry Purr since that's the only other celebrity scent I spent any time with this year, although I did smell Beyonce's Heat Rush and Rihanna's Reb'l Fleur briefly in-store and I can promise that neither one is a contender in my book.

1. Although many of these scents started out as perfume oils and were later released in alcohol-based formats, Kai being one example that comes to mind.