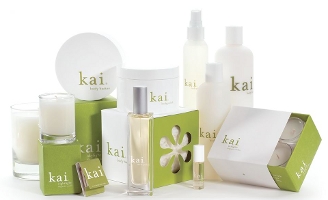 Kai is a fragrance created by Gaye Straza Rappaport, who wanted to capture the aroma of her vacations in Hawaii. It has something of a cult following (it was included in Style magazine's 2002 list of 5 Great Cult Perfumes) and has its own little celebrity fan base (Julia Roberts, Reese Witherspoon, Charlize Theron, and Naomi Watts are all rumored to wear it). The notes are gardenia, jasmine, tuberose, and lily.

Kai is a relatively simple, easy-to-wear scent. It starts with sharp green notes and gardenia. The sharpness fades, and the gardenia softens as it is joined by the other floral notes, but gardenia remains the prominent note.

For some time I lived in a house in San Diego which had several gardenia bushes just beneath my bedroom window, and when they were in full bloom, I had to close my window at night because the scent was so strong it would bring on a headache. Kai smells like gardenia, but it is not that gardenia. The green notes temper the sweetness of the florals, and once it calms it is very soft. It smells clean and fresh, but not aggressively so, and it does not smell at all soapy to me.

Kai was originally released as a perfume oil. The lasting power is good, but like most oils it stays relatively flat and close to the skin. It comes in a 1/8 oz roll-on for $45. I like Kai. For what it is, it is well done, but it is not a complex or unusual fragrance, and I've never been able to bring myself to spend even the $45. A small amount goes a reasonably long way, so I have contented myself with samples of the oil.

A year or so back, I did buy the Body Glow, a light body mist with a silicone and jojoba oil base. At the time, it smelled reasonably true to the scent, just much lighter, and for $28 for 4 ounces, it seemed like a bargain. This morning I am discovering that either I have a very bad memory and this is even more sheer than I recalled, or the Body Glow formula is not as stable as the oil. It is now so light that it is hard to make out the scent at all.

Kai is available at abeautifullife, apothia, beautyhabit, beautysak, eluxury, and luckyscent, among others.