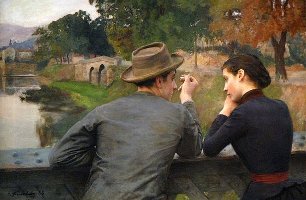 Even though I've finally finished my years (and years) of higher education, I still think of autumn as a season of "back to school" anticipation, complete with new books, new shoes, and new friendships — as well as the renewal of older friendships. Angela's recent post describing her fragrance collection as a group of friends made me smile and made me look at my own fall fragrance line-up in a similar way.

Les Parfums de Rosine Poussière de Rose was one of my first "niche" perfume purchases, and it's still one of my closest fragrance "companions." I actually wear it from fall through spring, because it always feels right. It reminds me of rose potpourri in a cedar box; very nostalgic. We're two of a kind.

Rochas Tocade is another longtime acquaintance, a rose-and-vanilla floriental that I bring back into rotation every autumn. It can feel a bit overdressed sometimes, and it's definitely not shy, but I always know I can rely on it to boost my confidence for a night out.

Ormonde Jane Ta’if is a more recent arrival to my perfume wardrobe, but it may be here for the long haul. I've finished off more than one sample vial of Ta'if — a seamlessly constructed composition of dark, dry rose with wisps of saffon and hints of dates, pepper, and resin — and, having passed through this "courtship" phase, I'm ready to commit to a full bottle.

Lalique Perles de Lalique entered my fragrance circle through an "introduction." The inimitable Karl at Aedes de Venustas suggested it to me, knowing my tastes, and he was right: it's a peppery-woody rose that never overwhelms. It also has a tailored, practical edge, so it's a good work-day scent.

Sonoma Scent Studio Lieu de Rêves tempers its sweet heliotrope heart with notes of cedar and vetiver. It's comforting but not marshmallowy; if it were a person, you could confide in it, knowing that you'd receive consolation but also some sound advice.

Calvin Klein Euphoria is a syrupy "fruitchouli" scent, it's a "grand-child" of Angel, it's a mainstream best-seller, and I've been wearing it every fall since it was released. Sometimes I just want a casual, berried-amber scent for hanging out and doing errands on a breezy Saturday afternoon.

Lolita Lempicka is a fragrance that holds many memories for me. It's also like some old friend that I don't see very often, but whenever I do get together with her, I realize that neither of us has changed much and we still have a lot to talk about. Lolita and I tend to "reunite" in the autumn, since I prefer to reserve anise and vanilla for cooler weather.

L’Artisan Parfumeur Poivre Piquant appeals to my love of eccentrics — not flamboyant, extroverted eccentrics, but the quietly quirky ones with dry senses of humor. I crave a little bit of spice in the fall, and this mix of white pepper, honey, and creamy musk is offbeat but still refined.

Etat Libre d’Orange Like This is the new girl in class who has such smarts and style that she would be intimidating if she weren't so approachable. It's everything I like in an autumn scent, because it's warm and cozy but still distinctive, spicy-sweet, and long-lasting.

Chanel No. 5 Eau de Parfum never really drops out of my circle of fragrance "friends," but I tend to reserve it for special occasions — why? I should "visit" it more often. I love most formulations of No. 5, but the Eau de Parfum has a rich Bourbon vanilla basenote that feels especially appropriate for the first autumn chill.

Which fragrances will be spending time with you this fall? Feel free to name a few in the comments. And check out the other Top 10 lists at at Bois de Jasmin, Grain de Musc, Perfume Posse, Perfume Smellin’ Things.