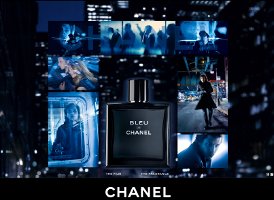 The 2011 fragrance awards season is mostly over,* and we have a winner: Bleu de Chanel, which took a whopping 8 awards, including nods from Italy and Canada plus two awards each from France, the US and the UK.

The second place winners were Gucci Guilty and Voyage d'Hermès, with four awards each.

*Not including Basenotes and Spain’s Academia del Perfume — I do not know when their awards will be announced for 2011.