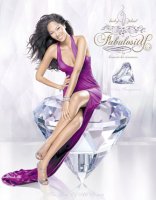 Fabulosity is the latest fragrance from Kimora Lee Simmons' Baby Phat line. A representative from Coty described her first scent, Goddess, as "kitschy and over the top"; perhaps they were referring to the packaging and advertising, as I found it pretty standard fare: a fresh, clean-ish floral, fairly sheer yet still too sweet for my taste, and not particularly memorable (in fact, I believe I commented here recently that I had never tried it on skin, but I was wrong — there is a whole paragraph on it in my testing notes). Apparently, it "succeeded beyond anyone's expectations"*, so there you are.

Fabulosity is the one I'd tag as over the top. Canada's National Post recently described it as "...an out-of-control Mr. Soft Cone truck...crashing into a Kool-Aid stand", and that's pretty accurate for the top notes, which are mostly sweet, syrup-y fruit over a megadose of vanilla (the notes: plum, orange blossom, tiger lily, "mysterious forbidden fruit", damask plum skin, Chinese osmanthus, coconut milk, purple violet, Tasmanian honey, vanilla absolute, patchouli and amber). Regular readers know that my tolerance for sweet fruit is minimal, so let's just say that I did not enjoy Fabulosity's opening.

Most of the drama is in the top notes, though. Fabulosity settles quickly, and then it's a relatively quiet blend of unrecognizable floral notes, vanilla and warm woody musk. The coconut is subtle at most, but it does lend a creamy finish. Some of the fruit remains (and while it is plummy, I'm guessing the "mysterious forbidden fruit" is in fact a patented Grape Kool-Aid accord), but it isn't overdone, in fact, my main complaint about Fabulosity's dry down is that while it's pleasant enough, it starts to verge on bland after 90 minutes or so.

Still, it's a wearable enough fragrance. I wore it next to a random sample of new-ish celebrity fragrances, including Britney Spears Midnight Fantasy, Sean John Unforgivable Woman, Jennifer Lopez Deseo and Mariah Carey M, and Fabulosity more than held its own. The dry down is easily as sophisticated as any of those, perhaps even marginally more so. It goes without saying, I'd guess, that if you're looking for elegance and sophistication, you can probably do better — and at the same price — by eschewing the celebrity name and looking elsewhere, but if you must have a celebrity name on your perfume, you'll do as well with Kimora Lee Simmons as you will with anybody else.

Baby Phat Fabulosity is available in 50 and 100 ml Eau de Parfum and in matching body products. I haven't seen it at any of the online discounters yet, but I'm sure it will get there eventually.