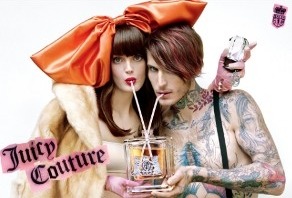 Juicy Couture starts with sweet — make that very sweet — fruits, heavy on the watermelon. As it dries down, the sweetness is cut momentarily by the water hyacinth and a vague touch of green, but it is amped up again as the white florals take the stage, and again later as the caramel and vanilla come into play. The tuberose predominates only for a short time, after that, it smells like indistinct white florals. The base is rather light, at least in the Eau de Parfum concentration, and is painted in tones that are more cool than warm, so despite the sweetness and the caramel crème brulée and vanilla, it does not have the feel of a gourmand scent.

Pamela Skaist-Levy, who founded Juicy Couture along with Gela Nash-Taylor, described the fragrance as "like something Barbie might wear", and that is exactly what it is: bright, perky, sweet and young. If it was a celebrity fragrance, it would be Britney Spears (a few years back, before her latest round of troubles) rather than Sarah Jessica Parker. I would think it would appeal to anyone who likes Miss Dior Cherie; those of you who like fruity florals but prefer something a bit subtler might want to try Delices de Cartier or Jean Patou's Sira des Indes. 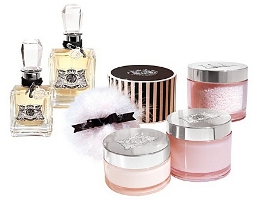 Testers of the Juicy Couture fragrance are available now at Bloomingdales, and they are taking pre-orders instore and online; as of today, the Bloomingdales site says it will ship in 17 days. It will be exclusive to Bloomingdales through the fall. The Eau de Parfum is $65 for 50 ml; $85 for 100 ml (there is also to be a 30 ml travel size for $50, but I have not seen it online yet); the Parfum is $300 for 30 ml.