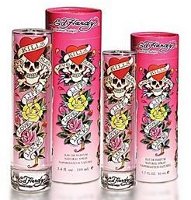 "Vintage tattoo wear" line Ed Hardy launched their first fragrances this year. The fashion line, from designer Christian Audigier, is inspired by the tattoo designs of Don Ed Hardy, and while I found the bottle a bit less inspiring in person than it was in pictures — isn't that usually the way? plastic always looks better in pictures — it's still a great design. I don't know that I'd wear a hoodie with the "Love Kills Slowly" skull and the "Life Love Luck" trail of roses, but on a perfume bottle it's fun, and it makes a nice change from the dreary parade of cookie-cutter bottles on display at Macy's.

The fragrance itself promised more fun. It was described as "super vibrant and sexy", and "vintage floralcy with a Rock'n Roll Edge" and a "dark eeriness". Anyone who reads here regularly already knows where this is going, right? If you want a strawberry-laced fruity floral this year, you've plenty of choice, and Ed Hardy will probably suit as well as anything else, but if you're looking for super vibrant, sexy, edgy or eerie, you'll have to look elsewhere.

Ed Hardy Woman is not worth describing in much detail since I've already described Ralph Wild and they were clearly poured from the same vat — probably just as well, since bringing 1000+ new perfumes to market this year must be keeping the perfumers very busy and I'd hate to see them fuss unduly over the strawberry fruity floral category. I've worn Ed Hardy Woman and Ralph Wild together three times now, and while they're slightly different, I'm quite sure I'd never be able to tell you which was which in a blind test. I think I like the Ralph Wild juice a bit better, but I'd take the Ed Hardy Woman bottle over Ralph Wild's in a heartbeat.

Neither fragrance is nearly as good as Miss Dior Chérie, which at the grand old age of 3 has become the gold standard for strawberry fruity florals. I am wearing all three fragrances as I type, and the Miss Dior Chérie, while not exactly the epitome of Rock'n Roll Edge, does a better job of it than Ralph Wild or Ed Hardy. It is darned sweet though, and what edge it has comes largely from the relatively dark patchouli base; some consumers, no doubt, will find the freshness of Ralph Wild or Ed Hardy Woman easier to wear. I wish I'd paid more attention to the new Miss Dior Chérie Eau de Printemps, but I gave it only a very brief sniff — if anyone can comment on how that one fits in, please do.

Ed Hardy Woman by Christian Audigier was developed by perfumer Caroline Sabas, and the notes include apple soufflé, mango, wild strawberry, rudy red grapefruit, freesia petals, watery muguet, linden blossom, warm amber, musk, tonka bean and vanilla pudding. It is available in 50 and 100 ml Eau de Parfum, and can be found at department stores or at the online discounters.