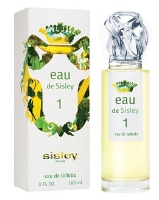 Sisley's Eau de Sisley trio is new on counters this month. They're meant to appeal to a “modern and youthful audience”, but modern and youthful is apparently meant only in the relative sense: they don't look, or smell, like they're meant for the same audience as, say, Vera Wang Rock Princess or Valentino Rock 'n Dreams.

I surprised myself by liking two out of the three. Eau de Sisley 1 — "meant to be like a dress made of sunshine", although why any of them should be like a dress is lost on me, especially since they're not particularly feminine — is a very green spiced citrus tea with tons of pink pepper (the notes: green mandarin, grapefruit, pink pepper, spice, jasmine water, green tea, juniper berries, patchouli and musk). It's crisp, fresh and lively, and the juniper berry is strong enough in the early stages to give it a unisex-leaning-towards-masculine bent. That characterization continues into the dry down, which has a dark but clean patchouli-woods base.

Like the others in this trio, Eau de Sisley 1 is sheer enough for hot weather wear, but has enough depth and interest to elevate it above and beyond your average summer-y citrus Eau de Cologne, and the lasting power is reasonably good. I found it enjoyable if not a must-have, and given the price (more about which below) that means that I will not have it.

Eau de Sisley 2 — "the olfactive embodiment of a dress of white flowers", although I found it to be no such thing — also starts off lively, with goodly amounts of basil and cardamom (the notes: cardamom, bergamot, basil, water iris, Egyptian jasmine, cyclamen, rose, patchouli, vetiver, cedar and sandalwood). As with Eau de Sisley 1, it has a masculine feel in the early stages. The florals in the heart are sheer and slightly aqueous, still, they lend the middle stages a slightly more feminine feel. The base is woody-musky and dark, and while it is not quite as dark as that of Eau de Sisley 1, it has almost astonishing lasting power — which figures because it is my least favorite, and the longer it's on skin, the less I like it. I wish I could explain why I don't like it, but despite wearing it four times this past week, I can't really pin it down: the far dry down just smells like a flat, rather unpleasant synthetic musk to me. If you've tried it, do comment — I'd love to hear other opinions.

Eau de Sisley 3 — "inspired by a low-cut dress" — is easily my favorite. The opening, with sparkling citrus and lots of zingy spices, is just a joy, especially if your attitude towards ginger is "the more the better" (the notes: citrus, bergamot, mandarin, grapefruit, lemon, red ginger, osmanthus, patchouli, vetiver, benzoin, vanilla and musk). The heart is a sheer floral with fruity undertones, sweetened ever-so-slightly with vanilla, and it's darned pretty for an hour or so. It has the palest base of them all, and after the 60 minute mark, it starts to slowly lose steam. It doesn't verge on downright boring until several hours have passed, still, I found myself wanting to reapply after about 90 minutes to get the burst of ginger again. Despite that, if I was going to buy one of the three, this would be my pick.

Given the price, however, I'm not going to buy any of them. They are well-done, but $165 a pop for 100 ml seems rather ambitious for what they are. As I've said before, it's hard to talk about what is "reasonable" when it comes to perfume prices: you aren't paying for the juice so much as you're paying for the brand name and the packaging and the overall mystique, and possibly, if you're lucky, for some degree of artistry. To some extent, you have to go with your gut, and my gut tells me these are simply not special enough to warrant the $165. Perhaps if they had done 50 ml bottles and managed to bring the price in at under $100, I would feel more kindly towards them, but as it is, they simply aren't as interesting as the many other things you could get for the same price, and for that matter, none of them can beat Sisley's gorgeous Eau de Campagne (even spendier per ml at $93 for 50 ml, although you can find it cheaper if you shop around at the discounters).