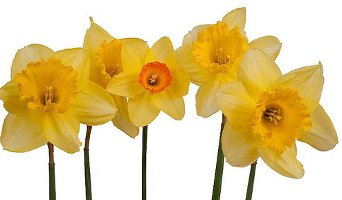 When spring arrives, the black and white world of winter seems to turn technicolor in splotches. The ground is mostly barren, but a patch of lurid daffodils lights up a parking strip, and a tulip tree looks like it has burst into white flames against the grey sky. Even the singing birds sound ridiculously cheerful, like a Looney Tunes short come to life.

Of course, I love it. And mostly I like choosing perfumes for spring that make the same garish splash in the cool, damp air. But sometimes moodier fragrances that reflect the dirt's slow awakening seem more appropriate. Here are my current favorites for spring, not in any particular order.

Amouage Ubar. Nothing says spring like lily of the valley — light, ethereal, and tinged with green. Unfortunately, when I wear Christian Dior Diorissimo, I feel like I'm wearing someone else's clothing. It feels cold on me. Ubar, on the other hand, is loaded with lily of the valley and sunny jasmine, but has a warm grounding of sandalwood and civet. I'm hoarding the few drops I have left in my sample sprayer.

Guerlain Chamade. Chamade's elegant wash of hyacinth and galbanum sweetened by black currant is spring in a bottle. It's chic spring, too — a spring where women tote Hermès bags and drink Sancerre at lunch. As an aside, I'm convinced that Parfums MDCI's new Coeur en Mai is Patricia de Nicolaï's take on Chamade. It's green, fresh with hyacinth and rose, and brought up to the times with a peppery overlay.

Ormonde Jayne Champaca. Champaca has all the green of spring along with the presence to stand up to the chill in the morning air leftover from winter. Plus, Champaca smells unlike any other perfume I've tried, and isn't something new what spring is all about?

Niki de Saint Phalle. Niki de Saint Phalle, on the other hand, isn't quite so innocent, but is insistent and unpredictable. Its marigold, mint, and galbanum surprise me every time I wear it, and the kick of oakmoss, sandalwood, and patchouli at the end keep me coming back.

Worth Je Reviens (vintage). Have you ever seen an old opaque green Firestone mug? If Je Reviens had a color, that would be it. To me Je Reviens is both charmingly old and surprisingly modern. It shines with a crystalline floral glow like a bouquet in a Jules Verne science fiction story. I like the vintage best. The new version is pale and limp, and Je Reviens Couture is too sharply aldehydic for my taste.

Jean Patou Vacances. Vacances is all sheets dried in the sun with the breeze blowing over the lilac bushes and a tender musk finish. It's marvelous. Since it's discontinued, try Frédéric Malle En Passant for a hit of springtime lilac.

Amouage Lyric Woman. Although it's not particularly evocative of spring, I have to put Lyric Woman on the list because right now it smells good to me whatever the weather, whatever my mood. Plus, you can make a case that its frankincense and coriander reflect the mood of dim, rainy mornings in April.

Comme de Garçons + Stephen Jones. I was unsure about Stephen Jones at first. It didn't seem to be my style. But for an urban spring, its violets awash in a tide of metallic aldehydes are perfect.

Piguet Bandit. Some people might argue that a leather fragrance has no place in spring. But I find Bandit to be a warm-weather leather if there ever was one. Bandit kicks off with a juicy green burst and settles into a leather than isn't overly oily. For a more ladylike composition with a dose of violets, Bandit's sister, Balmain Jolie Madame, is a nice spring leather, too.