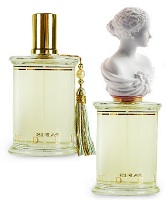 The other route taken by Patricia de Nicolaï opens up for us a different imaginary world; this is a green floral which instantly evokes a fresh spring day, a walk through woods perfumed with hyacinths and lily-of-the-valley.

Sicilian bergamot and Petitgrain balance the dewy and green notes of the opening, supporting subtle touches of galbanum, blackcurrant and melon.

The heart of the composition reveals a crystalline note reminiscent of a slightly rosy lily-of-the-valley, Bulgarian rose highlighted by a trace of Moroccan mimosa and bourbon geranium.

DS & Durga has launched Resin, a new fragrance in their Originals collection for men: