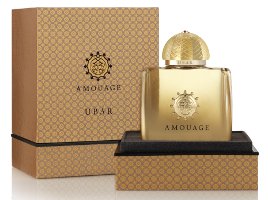 Amouage originally released Ubar in 1995. It was meant to celebrate Oman’s Silver Jubilee year, and was named for the lost Omani city of Ubar, long believed to be an important center of the historical frankincense trade and re-discovered in 1992 with the aid of satellite imaging. The original bottle (see below) was by Pierre Dinand, and while it was a striking design, there was something about it that I always thought a poor fit with the juice.

Ubar has been relaunched this year (20091). It has new packaging (see image above), a new concentration (the original was an Eau de Toilette; now it's an Eau de Parfum) and a new price (much higher). The notes (bergamot, lemon, lily of the valley, Damascena rose, Bulgarian rose, jasmine, sandalwood, synthetic civet and vanilla) are reportedly the same. Here's what I had to say about the original Ubar when I reviewed it in 2005:

Ubar starts with a citrusy lily of the valley with a touch of civet. It gives way to a soft floral, mostly rose at first, but with the jasmine becoming considerably more pronounced as it dries down. The base is lovely: a very smooth sandalwood with a just a trace of vanilla. There is a muted note of musk, and I've been trying to decide if there is a bit of frankincense as well. The civet is noticeable but not overdone; this is not as animalic, or as heavy, as say, Shalimar, or yesterday's Gold Pour Homme.

Ubar is available as an Eau de Toilette only. The floral notes are not long lasting, but the sandalwood base (my favorite part anyway) lasts for hours. It is cheaper than some of the other Amouage scents, but I wouldn't go so far as to call it a bargain. A half ounce can be had for around $60.

Let me start by noting that fast forward to 2009, and that $60 sure looks like a bargain to me — I'm still kicking myself for not having bought it when I could have. But so be it, how does the new Ubar compare with the old? Well, first, I thought it was gorgeous in 2005, and it's still gorgeous in 2009, but the change in concentration (and obviously, the reformulation) is significant: the new Ubar is a much heavier scent, with considerably more emphasis on the floral notes in the heart and correspondingly less emphasis on the base. The original Ubar was, to me, a sandalwood fragrance decorated with a few flowers; the new Ubar is a floral fragrance, first and foremost, with a woody oriental base — it's now what Luca Turin recently called a "humongous floral" (see the latest quarterly update to Perfumes: The Guide2). Beyond that, if you strike the word "soft" from the first paragraph of my original review above, the rest can stand as an accurate description.

Ironically, the change gives it a more old-fashioned feel than the original. It's not the sort of fragrance that (most) women nowadays would spray on for a day at the office — it's more of a "big night out" scent — and while the base is probably not any more animalic than it ever was, with the higher concentration, it's more noticeable.

The new Ubar is arguably a better scent than the old, but it isn't one I'd be likely to reach for as often as I would have reached for the original. I suppose it isn't likely that we'll see an Ubar Eau Légère, but such a thing would be very welcome — especially in the original 15 ml.

2. And I should also note that he gave it 5 stars.