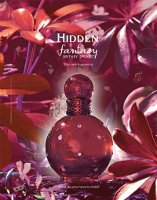 At this point, I think we can all safely ignore news sources that tell us that the celebrity fragrance trend is over, no? And clearly, the days when a little personal trouble might hurt a celebrity's market appeal are long gone; on the contrary, one might assume the more trouble the better — Paris Hilton, I suppose, qualifies as Exhibit A, although Britney Spears has certainly given her a run for the money (pardon the pun).

Britney's latest entry, Hidden Fantasy, is the first celebrity scent to hit the perfume counters this year. It's the second flanker to 2005's Britney Spears Fantasy, the first being 2007's Midnight Fantasy. My feelings about Fantasy are not all that different now than they were when I tried it shortly after its release:

Given that my expectations were low, I was pleasantly surprised. I wouldn't go so far as to say that I like it, but I don't hate it, and if given the choice between this and say, Miss Dior Cherie, I would pick Fantasy.

At the time, I was just starting to explore celebrity fragrances; now that I've tried most of what's been released over the past few years, I'll qualify the above by noting that Fantasy is considerably better than much of the competition. Midnight Fantasy, not so much — it reminds me of grape Kool-Aid, and not in a good way (although offhand, I can't think of a good way that something could remind me of grape Kool-Aid). When the grape Kool-Aid fades, little of interest is left behind. I found the dry down bland. Mind you, not everyone agrees with me; Midnight Fantasy has lots of fans, and at the moment, it has a higher rating on MakeupAlley than the original Fantasy.

The recipe for the new Hidden Fantasy is pretty much standard for a celebrity fragrance geared towards the youth market: fruit, more fruit, sugar, sheer nondescript floral notes, vanilla sugar, pale woody musk. In this case, they've gone with the Blastin' Berry Cherry Kool-Aid for the top notes, and they've cut it (thankfully) with lots and lots of tart citrus (the notes: sweet orange, tangerine, grapefruit blossom, verbena, jasmine, stargazer lily, sweet Napolitano cake, vanilla bean, jacaranda wood, fluid sandalwood and amber). I can't really say I like it, but I find it considerably more palatable than the opening of Midnight Fantasy. Then we've got the "flowers", followed by Fantasy's warm vanilla cupcakes, here given a twist by a touch of cherry almond flavoring. The lasting power is very good, and in contrast to Midnight Fantasy, Hidden Fantasy's personality doesn't evaporate with the top notes.

Hidden Fantasy is fine, and while it's not to my taste, I'll be surprised if it doesn't do very well. For my part, I like Fantasy better, and I like Britney's Believe even better still. For that matter, if I were after young, fun, fruity, trendy and new, I'd skip Britney Spears altogether and go with Ed Hardy's new Love & Luck.

Britney Spears Hidden Fantasy was developed by perfumer Rodrigo-Flores Roux. It has not yet officially launched, but it can be found at Kohls brick 'n mortar stores. It is available in in 30, 50 and 100 ml Eau de Parfum.