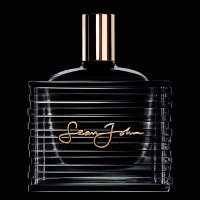 Sean John Combs (aka Puff Daddy, aka P Diddy) launched his first fragrance, Unforgivable, in 2005 under the slogan "Life without passion is unforgivable". It is targeted at men in the 18 to 35 age group; per Combs, "There are millions of men taking my lead, and I have to take them to the promised land of sexy." (via Daily News Record, 8/29/2005) It is probably no surprise that his idea of the promised land of sexy ruffled a few feathers.

Unforgivable starts with dry, rather high-pitched citrus notes, but settles quickly into a warm, slightly sweet scent with an herbal aromatic cast. It continues to get warmer the longer it is on skin, eventually drying down to a mild blend of woods, light amber and lots of musk. The mid notes have a bit of sparkle, presumably from the champagne accord, and the Mediterranean air accord gives it a fresh ozonic-marine feel that lasts straight through to the end.

It is rare that I like anything very ozonic so it is no surprise that I don't adore Unforgivable, but it is a well done fragrance. It is vaguely reminiscent of the classic masculine scents from Creed, but in a more understated vein, and in general I found it to be lighter, cleaner, and more conventional than you might expect from someone who seems to court controversy in other arenas. It doesn't strike me as particularly sexy, or at least not so sexy as you might expect from the ad campaign. I should think you could quite safely wear it to the office.

A limited edition Eau de Parfum "couture version" launched at Saks late last year for $300 for 75 ml, and bottles are still available on the saks website. I am trying the Eau de Toilette which was released last month. The lasting power is excellent. It runs $55 for 75 ml and $75 for 125 ml.

It is bound to hit the discounters eventually, but for now you'll have to pay full price at a department store. Ancillary products are to follow, and a women's fragrance will debut later this year. Wondering what he'll name that one...