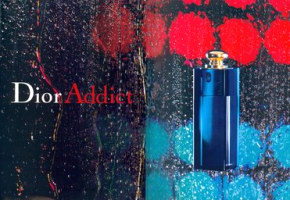 Christian Dior launched Addict in 2002. They were hoping the name — and the tag line, "Admit it" — would get attention, and they got their wish; although it had been preceded by a lipstick and nail color range under the same name, it was the perfume that got people riled up. "The advertising industry has long been drawn to the low-life look, but the French fashion house Christian Dior has taken it to new depths", noted NPR's Weekend Edition*. After months of pressure from anti-drug abuse advocacy groups, Dior dropped the tag line and replaced the early ad images that had appeared to glamorize illegal drug use.

Whatever punch the name Addict had in 2002 has been largely diluted by the subsequent flankers — Dior Addict 2 Summer Litchi, anyone? But the Addict juice, a floriental developed by perfumer Thierry Wasser, still packs a wallop. The opening is orangey citrus plus sweet (make that very sweet) vanilla, and while it announces from the outset that it is not going to be my sort of thing, I do think the top notes have their charm, especially when applied in moderation. The opening is sweet, heavy vanilla, yes, but it's also got a sort of dark, smoky-spicy thread running through it that I find attractive and that seems appropriate to its name; about the last thing on earth it makes me think of is sugar candy.

After that, everything goes wrong. I've never smelled the Queen of the Night Flower (aka vanilla cactus) that is featured in the heart notes (other notes: mandarin leaf, silk tree flower, rose, jasmine, orange blossom, bourbon vanilla, sandalwood and tonka bean), and the dry down of Addict reminds me that perhaps I'd just as soon not. The floral notes in Addict's heart are loud, and while I don't always mind sweet vanilla plus loud florals (Tom Ford Black Orchid, for instance), Addict seems to screech unremittently for the next couple hours before settling down to the dark, smoky-spicy fragrance foreshadowed by the top notes.

Addict is often compared to an earlier Dior fragrance (and another vanillic oriental), 1998's Hypnotic Poison. Hypnotic Poison sounds on paper like something I'd hate, but I actually like it very much. According to Wasser, the brief for Addict called for a "fragrance both sensual and full of energy"**, but it could just as well have been "bring me the trashy, loud-mouthed younger sister of Hypnotic Poison".

Dior Addict fans, please feel free to flame me in the comments.