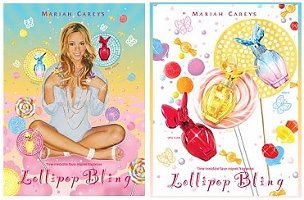 In case you missed it, the story behind Mariah Carey's new Lollipop Bling trio is that Carey's husband, Nick Cannon, proposed with a ring hidden in a Ring Pop package. So the three new candy-inspired fragrances — Honey, Ribbon and Mine Again — were made in partnership with Topps, the makers of Ring Pops, and when they appear in mass market stores next year (right now they're at Macy's and the like) they'll be marketed alongside actual Ring Pops.

Honey was my favorite of the three, but that isn't exactly saying much. It's supposed to be the "bright and sunny" entry, but it isn't the light, sparkling and fun summer scent it could have been: it's mostly sweet pineapple over your basic floral musk. It's heavier and flatter than I expected, and it fizzles out to "random leftover perfume smell" fairly quickly.

Ribbon is the only one of the three that was inspired by an actual Ring Pop flavor: Blue Raspberry. Happily (or not, depending on your perspective) the lollipop blue raspberry is mostly in the top notes; after that, it's your average celebrity fruity floral — it does not smell like any particular fruits or flowers so much as it smells like your average celebrity fruity floral. It's perfectly wearable if not particularly interesting. It stays vibrant longer than Honey, but still, it does not stay vibrant for as long as you'd expect for an Eau de Parfum.

I was hoping Mine Again, the chocolate raspberry + magnolia entry, would be great fun, but it was the only one of the three that I found unpleasant to wear. On me, it smelled like chocolate cola + melted plastic for an unforgivable length of time before settling into something I could bear, and of course, it has the best longevity of the three. If you were dying to try it, hopefully you will have better luck.

If you were after some fun candy for summer, these are worth a shot, but I do think you can do (much!) better: the DKNY Delicious Candy Apples trio, to name just one example, were far and away better than these. If you're after something cute from a celebrity, I'd go for one of the Gwen Stefani Harajuku Lovers (or the newer Harajuku Lovers Sunshine Cuties): the fragrances aren't genius, but at least the packaging is great fun. The Lollipop Bling trio fragrances are not inspired, and the bottle is the same as that used for the M by Mariah Carey and Luscious Pink fragrances (both of which were better than these).

Mariah Carey Lollipop Bling Honey, Ribbon and Mine Again were developed by perfumer Laurent Le Guernec; they're available in 30 ml Eau de Parfum for $35 each.