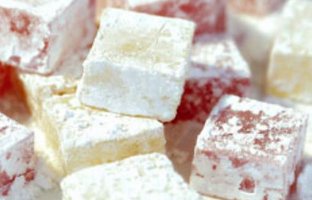 Rahät Loukoum was launched by Serge Lutens in 1998. The fragrance was inspired by the thick jellied candy that is popular as lokum in the Middle East, and known in the Western world as Turkish Delight (for a brief history, see the Turkish Delight entry in Wikipedia). It was created by nose Christopher Sheldrake, and the notes include fresh white almond, crushed cherry pits, hawthorn, heliotrope, Turkish rose, balsam, tonka bean, aldehydes, white honey, musk and vanilla.

Rahät Loukoum opens with tart cherry and a big dose of alcohol. As has often been noted, it smells pretty much like cherry cough syrup. The almond notes intensify over the next few minutes; the notes indicate "fresh" almonds, but to my nose they have the almost smoky scent of just-toasted almond slivers.

I was fairly certain I had never tasted Turkish Delight until I went searching for pictures of it; now I am fairly certain that I have, but I have no memory of the taste so I cannot say to what extent the fragrance evokes the candy. To me, the early dry down calls to mind a plate of crunchy Amaretti cookies, very warm and nutty, with a glass of Kirshwasser (cherry brandy) on the side.

After a half an hour, the cherry is a mere whisper. The almond is also calmer, and accented now with vague hints of dried rose petals. It is more milky than doughy at this stage, and the finish is soft and fuzzy, but not quite powdery. There is a touch of vanilla, and a lightly honeyed musk, but the sweetness is restrained, and it smells less and less like food the longer it is on the skin.

Rahät Loukoum was the first Serge Lutens fragrance I tried, and I was immediately hooked. It was, I think, my introduction to the whole idea of a comfort scent: something to wear not because it is pretty, exactly, but because it is soothing, and evocative, and perhaps even calming. I find it almost addictive.

When I first started reading the fragrance board at MakeupAlley, a frequent topic of discussion was finding a suitable substitute, given that Rahät Loukoum is expensive and hard to get your hands on if you live in the United States (see below). In my humble opinion, there is no reasonable substitute, but there are other fragrances worth trying. Lady Evangeline, by the Lousiana perfumery Lagniappe Oaks, is one possibility. It is flatter and doughier, and lacks the cherry note, all of which may or may not be a good thing depending on your personal taste. Givenchy Oblique Rewind is often compared to Rahät, and to Luctor et Emergo by The People of the Labyrinths, and I suppose you could say that the three are distant cousins. Oblique Rewind smells like a combination of cherry cough drops, cherry pipe tobacco, pistachio and honey. It is an interesting scent and I have been meaning to revisit it, although I am not sure whether it is still in production. And of course, there is Keiko Mecheri Loukhoum, which is a soft, very powdery vanilla musk. It is no doubt a captivating scent if you like powder. Unfortunately, I don't, so have nothing else to add. Do comment if it is a favorite of yours.

Rahät Loukoum is in the Serge Lutens exclusive line; for buying information, see the listing for Serge Lutens under Perfume Houses.