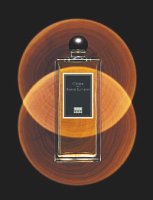 Cèdre was released by Serge Lutens this year, around the same time as Bornéo 1834. Both fragrances were created in collaboration with nose Christopher Sheldrake. Cèdre joined the export line while Bornéo was launched into the exclusive line. Why? I don't know. The notes for Cèdre are tuberose, cloves, cinnamon, amber, musk, and cedar.

A friend described the top notes of Cèdre to me as spiced apple cider (or just a spiced apple? I have a terrible memory), and that is apt, although perhaps spiced, wood-aged hard cider comes closer. It is very rich and warm and sweet, with fruity undertones and just the slightest hint of the mentholated opening of Tubéreuse Criminelle.

As it dries down the tuberose intensifies, but it is not the hothouse variety, nor is it the cold, silky tuberose from Tubéreuse Criminelle, but rather something very soft and quiet, and muffled by the wood and a honeyed amber. The cedar itself is surprisingly subdued; it is a very woody fragrance but it has none of the sharp edges I commonly associate with cedar. There is a whisper of something animalic — leather, maybe — and a trail of something smoky and dusty and dry weaving through the sweetness in the final stages. It has a velvety, almost-powdered musky finish.

Serge Lutens is one of my favorite fragrance lines, but the cedar-based scents in the Bois series do not by and large appeal to me, and I am still not sure what I think of Cèdre. The first time I tried it, I thought it was too much sweet amber and too little cedar and tuberose, but I have worn it 4 or 5 times since then and it is starting to grow on me. Just this morning I was caught up short by lingering traces on the jacket I wore yesterday. This is how I ended up addicted to Ormonde Jayne Ta'if, another scent that I did not care for the first time I tried it. Time will tell.

Cèdre is an Eau de Parfum. For buying information, see the listing for Serge Lutens under Perfume Houses.