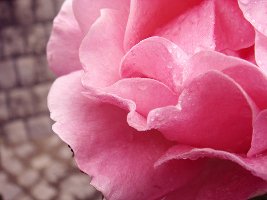 Someone asked in the comments to last week's review of Chypre Rouge if I thought that the Serge Lutens fragrances were an acquired taste, and I answered yes, sort of. It isn't that any special knowledge is required to appreciate them: if special knowledge was required, I'd be no more likely to appreciate them than anyone else. But they do not, by and large, try to appeal to a large audience. If all you are familiar with is the standard department store fare, Serge Lutens may challenge your idea of what a personal fragrance ought to smell like. They aren't all "pretty" in the conventional sense, and a few of them qualify as downright odd.

If you are a serious fragrance fanatic, odd quickly becomes a good thing; after all, it sometimes seems like most everything else on the perfume market was dispensed from the same vat. But odd in itself obviously isn't enough, and it certainly doesn't account for the superstar cult status accorded to Serge Lutens — how many other perfume lines have their own fan sites? There is nothing else as guaranteed to cause a flurry of anticipation on the fragrance forums and blogs as the announcement that a new Serge Lutens fragrance is due for release.

It is hard to explain the allure of the line to someone who hasn't smelled any of the fragrances, and for that matter, I don't think it is easy to understand until you've tried quite a few: his fame rests on the entire body of work he has produced with perfumer Christopher Sheldrake rather than on any one fragrance. More than with any other line I can think of, the fragrances are like personal artistic statements; to smell them is akin to entering someone else's dream world. At the same time, as perfumes, they are satisfyingly rich and complex, and as such they stand in stark contrast to many other niche lines.

All of which is a very roundabout way of introducing Sa Majesté la Rose, another Christopher Sheldrake fragrance, and the one I would present as evidence that Serge Lutens can do conventionally pretty, if that is what you are after. Sa Majesté is composed of absolute of moroccan rose, blue chamomile, geranium, lychee, clove, honey, vanilla and gaiac wood, and is said to be one of Serge Lutens' favorites.

More than any other fragrance in the Serge Lutens line, Sa Majesté celebrates the beauty of a single flower. If you close your eyes and smell deeply, you might pick out one or all of the notes, but for the most part it smells like dewy rose petals with a touch of greenery. It is not quite bright, not quite dark, but somewhere in between. The initial burst can be overpowering, but after that it is very soft. Once it settles it is almost linear, although the dry down is somewhat more honeyed than the opening, and the gaiac wood, while still subtle, is a bit more of a presence after an hour or so has passed.

It isn't the most interesting from the Serge Lutens line, but it is a beautiful perfume. As with many rose scents, I simply don't reach for it very often, and then when I do finally wear it I wonder why I so rarely do.

Note: top image is In the sweetness of friendship let there be laughter, and sharing of pleasures. For in the dew of little things the heart finds its morning and is refreshed by Parvin ♣( OFF ) at flickr; some rights reserved.

25 Rose Fragrances Every Perfumista Should Try