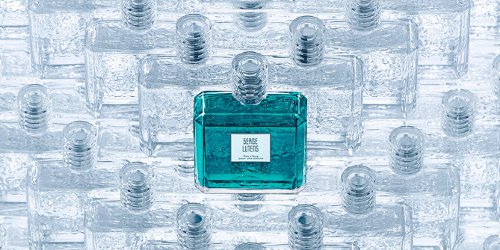 Last February, Serge Lutens launched Des Clous pour une Pelure, a new fragrance in the brand's Les Eaux de Politesse collection. (You may remember that Les Eaux are designed to be "light, fresh, devoid of the heady, sticky, overly masculine notes of colognes." I didn't, and had to check.) Lutens himself says, “I use the word ‘clous’ — meaning nails, or things that are practically worthless — metaphorically, because this Eau is dear to me! The orange peel pricks your eyes, and by nails I mean cloves, of course.” Of course.

We also learn that "[t]his invigorating and spicy fragrance traces its roots back to the medieval tradition of clove-studded pomanders" — now, there's some information I can work with. Pomanders were originally small spherical containers of pierced metal that held aromatic herbs or spices and were worn as pendants or otherwise attached to clothing; they were carried as protection against illness, and at the very least, they distracted their owners from the odors of everyday life in the Middle Ages. The tradition of crafting a pomander from a whole orange studded with dried cloves probably emerged somewhat later, in the early 1600s. Even though we now know that bad smells don't actually carry sickness, the compulsion to combat them with good smells still holds sway over us.

Des Clous pour une Pelure (literally, "nails for a fruit rind") includes notes of orange, nutmeg and spice. It's fairly linear and "dry"-feeling overall: its orange is definitely a handful of dried peels rather than a freshly picked fruit, and its "spice" effect is more specifically clove and a hint of cinnamon. I normally avoid anything with notes that even suggest proximity to Yankee Candle territory, but Des Clous pour une Pelure avoids any cloying sweetness or artificiality and is much more refined than the average winter-themed fragrance item. It actually reminds me of the Agraria Bitter Orange potpourri that my mother used to buy at Henri Bendel as a special gift for friends.

Like most Lutens fragrances, Des Clous de Pelure is gender-neutral. Unlike many of them, it has mild staying power; despite its Eau de Parfum designation, it feels more like an Eau de Toilette in its intensity and staying power. For longtime, diehard Lutens fans who haven't found the brand's recent releases rich enough or eccentric enough for their taste, Des Clous won't seem particularly interesting. Personally, I've never been able to carry off anything like Muscs Koublaï Khän or even Tubéreuse Criminelle. (My favorite Lutens, for reference, are La Fille de Berlin and the classic Féminité du Bois.) I'm enjoying this fragrance, then, as a seasonal treat that enhances my holiday mood without challenging it.

There is one weird thing about this fragrance that I should mention: its color. Des Clous pour une Pelure's liquid is the vibrant turquoise blue of drugstore mouthwash, a shade you'd expect for some masculine flanker called Ice Blue Power Xtreme, but not for a niche fragrance that smells like old-fashioned Christmas decoration. I'm not sure what the intention was here — the other Eaux de Politesse are clear or nearly clear — perhaps it's a Dadaist joke?

In the end, Des Clous pour une Pelure turns out to be a nostalgic perfume for me, due to its fancy potpourri associations and my memories of learning about Lutens on the Makeupalley.com message boards back in the early 2000s. I'll always be a little sentimental about "Uncle Serge" and I'll always value the friendships I made on Makeupalley, as well as here on Now Smell This! So I wish you a happy, healthy, and well-fragranced 2021, however you choose to scent it.