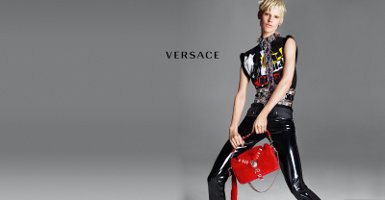 Italian fashion design house founded by Gianni Versace in 1978. Versace was known for his bright colors and sexy styles; Vogue notes that his "raunchy, barely-there dresses and reveal-all attitude to the female body gained him a reputation for having been inspired by the dress sense of prostitutes". Since his death in 1997, the house has been under the design control of his sister, Donatella Versace.

Versus is Versace's diffusion line, established in 1989.

The Versace fragrance license has been held by Euroitalia since 2005.

See all articles on Now Smell This tagged Versace.

See the Versace entry at Voguepedia.