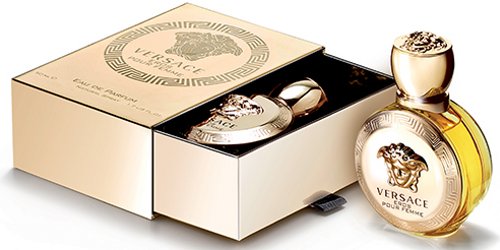 "The customer who wants something Versace," she says, "wants what Versace stands for." — Donatella Versace2

Anyone who participates in the damage polls here knows that Donatella Versace has a thing for perfume. Of course, she's also a businesswoman. The modern Versace fragrance line emphasizes the "business" part more than the "thing for perfume" part, which might explain why so few perfumistas want something Versace. I did think Versense was pretty good, and I still have some fondness for The Dreamer, but the rest of the line is a generic blur to me. Is there a Versace fragrance you love? Do comment.

Eros Pour Femme, the feminine counterpart to 2012's Versace Eros, is the latest. Kevin didn't much care for Versace Eros, but of course it's selling just fine without his help, and Eros Pour Femme will likely prosper without mine. The basic gist of Kevin's review:

As I wore Eros I thought: “Not great, but not awful. So-so.” But I only had to wait about 15 minutes for Eros’ true character to emerge…and this guy’s not a “hero” but a phony (and cheap to boot).

The opening of Eros Pour Femme is just that, so-so. It's sharper than I'd like, and right from the outset smells like more money went into the packaging (and the Lara Stone commercial) than the juice, but it's fine and the pomegranate keeps it reasonably lively. Things go downhill from there; eventually, it's not quite as good as fine. The notes, if you insist, are lemon, bergamot, pomegranate, lemon blossom, jasmine, peony, sandalwood, ambrox, musk and woods, but after 15 minutes it mostly smells like a thin, cheap floral of no particular distinction, and you'd never guess that it costs as much as it does,3 or that three very gifted perfumers — Alberto Morillas, Olivier Cresp and Nathalie Lorson — worked on it. With so much talent at hand, I can only assume Eros Pour Femme is exactly what Versace wanted, or at least, the best they were willing to pay for. 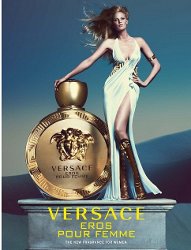 1. Short vs. long idea stolen from Ari at Scents of Self. To her credit, her long review of Chloe Love Story is way shorter than my long review of Eros Pour Femme.

2. Quoted in Out of tragedy at The Guardian, 2/9/2008. As for what exactly Versace stands for, The Guardian pointed out this year that "Among the limp fairytale narratives of haute couture – where, to judge by the dresses, female fulfilment is a matter of embroidery and weddings – the Jackie Collins plot of the Versace empire is compelling."