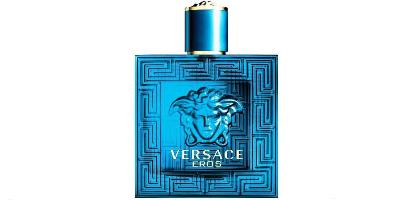 Versace Eros (a scent for a “hero” says Donatella Versace) launched this winter; the Eros ads are hilarious (the film is over-the-top kitschy and the print ad (see below) is, I assume, “inadvertently” funny, with the model’s body reconfigured by Photoshop so a huge bottle of Eros could be inserted where his abdomen-crotch-upper thigh should be…leaving a ludicrously elongated body). Ads aside, I was not expecting much from Eros, the perfume.

Eros begins with vanilla-mint aromas, reminiscent of barbershop fragrances (Jean Paul Gaultier Le Mâle, anyone?); ambroxan with a clove-like touch appears next alongside hard-working, always-employed tonka bean. Eros’ base notes of cedar (discernible) and vetiver-oak moss are well blended to produce a standard-issue woody accord. Eros starts off as a warm fragrance, not cool or crisp or “fresh” in the sense we’re used to in men’s mainstream/designer perfumes.

As I wore Eros I thought: “Not great, but not awful. So-so.” But I only had to wait about 15 minutes for Eros’ true character to emerge…and this guy’s not a “hero” but a phony (and cheap to boot). As it stays on skin, Eros’ vanilla curdles, its ambroxan sours and explodes on skin (go away!) and an Axe-like “clean/fresh” note emerges that, when combined with the oriental-woody elements, makes me queasy. I’m sure there’s not one natural ingredient in this perfume…or even any expensive man-made materials.

I often wonder what perfume will smell like if the EU/IFRA continues to get its way and deletes all materials from fragrances that cause even a few people on Earth to have an allergic reaction. If hyper-artificial Eros is an example of the fragrances we should expect from such rules, regulations and restrictions, I’ll stop buying perfume and spend my money on flowers at the florist and in my garden.

Versace Eros, currently a Macy’s exclusive in the US, is available in 30, 50 ($62) and 100 ml ($80) Eau de Toilette and in matching grooming products (shower gel, deodorant, aftershave balm).