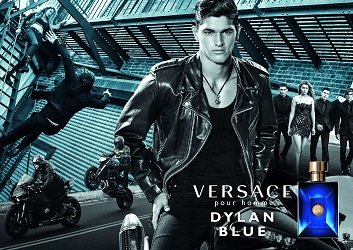 Versace just released Versace Pour Homme Dylan Blue and Donatella Versace had this to say about it:

I have always believed men should be strong, passionate, proud, expressive, unafraid. I love that in today’s world, men feel able to reveal their true natures, to share their passions and their beliefs. It’s there in the fragrance, which is strong, fresh, seductive.1

Donatella grew up in ITALY. Italian men, including those in diapers and strollers, don't exactly have a reputation for hiding their true natures, passions or beliefs. Who put these dumb words into Versace's mouth? She grew up surrounded by brothers! Robin Here at NST™ had another take on Donatella, using Versace's quote "I love how Dylan Blue captures such an evocative world of Versace masculinity." Robin: Then, I picture her closing the door of her room, laughing, and counting her money.

I don't know Ms. Versace personally (she seems nice enough in interviews), so I don't relish her successes...or gloat over her failures. Call me stone-cold. However, Donatella Versace is the face behind a big business; she has (one surmises) CLOUT, and she must know what great perfume smells like (I could be wrong) and yet she continues to put the Versace name on dull fragrances. That's annoying because in the past Versace released some good perfumes. Of course, I could be putting the blame in the wrong place: Euroitalia is the Versace brand's licensee and they speak nonsense in PR new releases all the time. For instance, in Women's Wear Daily, Euroitalia President Giovanni Sgariboldi said the company “must remain concentrated on the development of innovative products and present novelties that really are so.”2 I can't use the words "innovative" or "novelties" in the same sentence with "Versace" and "perfume."

Dylan Blue begins with promise; there a vibrant (talc-y) bergamot note, some high-pitched/aquatic fig (decidedly phony, but unusual nonetheless) and a delicious "overripe" grapefruit skin note. Add to these some pepper and dry papyrus and you have a ZINGY opening! But as I feared, "zingy" quickly loses its "ingy" and we're left with zzzzzzzzzzzzzzzzzzzzzzz. Wake up! 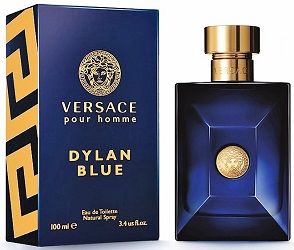 After its strong start, Dylan Blue reverts to dull-as-dishwater, department-store form and hauls out a no-brainer musk-tonka-ambrox base (with a floral touch...what flower? I couldn't tell you).

Dylan Blue has good sillage and lasting power. The fun opening lasts a tad longer if you get some perfume on your clothing. In my perfume infancy, I might have bought Dylan Blue based on its opening the moment I sniffed it in a store. I've learned my lessons: no buys unsniffed and no buys until a fragrance develops on my person for at least a few hours.

If you need a chuckle do watch the Bruce Weber disaster of a perfume ad...words, music, set, theme, "acting"...all equally horrendous, and dated.