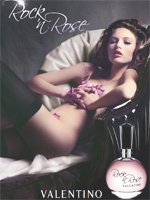 Valentino launched Rock 'n Rose in 2006. The fragrance was said to have been "inspired by a new generation of young Valentino women....a Rose on the outside and a Rocker on the inside"; as you can guess, that means Rock 'n Rose hopes to bring younger consumers (or more specifically, "younger women who aspire to a luxurious lifestyle"*) into the Valentino fold.

Valentino Garavani reportedly loves roses; the garden at Wideville, his estate outside Paris, is said to have "acres" of roses. I could swear I read somewhere recently that Valentino does not really adore the smell of roses, but I can't find a link so perhaps I dreamed it. At any rate, Rock 'n Rose is not meant to be a rose soliflore. Valentino describes it as a "fantasy rose" fragrance; in other words, expect a modern stylised rose. The opening is bright and fruity and green, and a bit sharp. The lily of the valley is prominent in the early stages, after that, the rose is center stage (other notes: bergamot, black currant, "crunch green", gardenia, orange blossom, sandalwood, heliotrope, vanilla, orris and musk). The florals in the heart are strong and diffusive, but at the same time, they smell indistinct, even watery — you would not have to love roses (or any other flower) to like Rock 'n Rose.

The dry down is woody and middling-dark, with sweet vanilla, the merest little smidgen of powder and lots and lots of musk. After an hour or so, it feels very soft and smooth, but I wouldn't call it light — it would be easy to overapply Rock 'N Rose. It is meant to be edgy, and I suppose it is edgy in comparison to your average department store fragrance geared towards a young audience. It is certainly edgier than some other recent "modern roses" (Stella McCartney's Stella, Vera Wang's Truly Pink). Still, if your idea of an edgy rose is something along the lines of Frederic Malle's Une Rose, you won't be impressed. 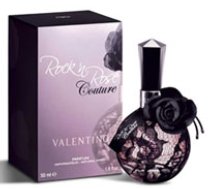 The first Rock 'n Rose flanker, Rock 'n Rose Couture, followed last year (Rock 'n Rose Prêt à Porter is still to come). The bottle is swathed in black lace (an improvement, if you thought the original looked too much like a nail polish bottle).

I expected that Rock 'n Rose Couture would be deeper and edgier, but it is rather the opposite. The top notes are brighter and sweeter, and there is less of the stemmy "crunch green" accord. The floral notes in the heart have been amped up, particularly the white florals; the musky notes in the base have been tamped down a bit, although otherwise the base is largely the same. It is less edgy, more feminine and romantic.

I can't say I love either fragrance. I found the musky base of Rock 'n Rose overwhelming, and for that reason, I prefer the lighter Couture version. Still, for a modern rose-ish sort of thing, I'd much rather wear Stella, for a young and "kicky" rose, I'd take Bond no. 9 Bryant Park. For a real "rock 'n roll" rose, maybe Juliette Has A Gun Lady Vengeance or Christian Dior Midnight Poison?

Advertising image is via the forums at Images de Parfums.