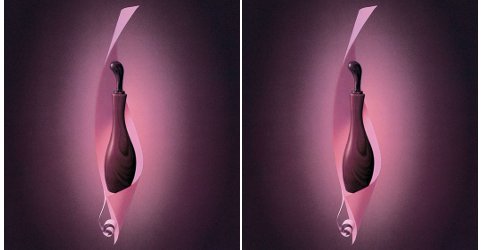 Just as Picasso had his Blue period, Serge Lutens had his “Bois” period, and Féminité du Bois was its foundation. Féminité du Bois established a new “flavor” in women’s perfume: sharp cedar counterbalanced with fruit and spice.

Féminité du Bois launched in 1992 under the Shiseido name before Serge Lutens fragrances earned their own label. (If you have one of the old brown bean-shaped bottles, it will be labeled “Shiseido Féminité du Bois.”) It was developed by perfumers Pierre Bourdon and Christopher Sheldrake, and its notes include Moroccan orange, Turkish rose, Atlas cedar, violet, beeswax, honey, peach, cardamom, cinnamon, clove, sandalwood and musk. 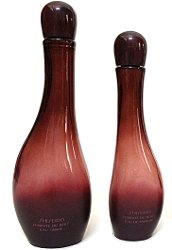 Despite its surfeit of cedar — the Serge Lutens website says the formula is 40% cedar — vintage Féminité du Bois is a rich, multi-dimensional fragrance. I’m lucky to have one of the brown bean bottles. From the get-go, Féminité du Bois shows her colors. First comes muted mandarin backed by mulling spices with a hit of cumin. Cedar is right there, too, and right away. It’s not a hint of cedar, but a shimmering, freshly split log. Then, ripe peach and rose soften the cedar just a touch — not enough to take away from the cedar’s raw tang. But they’re present.

All these notes add up to a definite signature. Féminité du Bois is bold, yet I find it easy to like. After half an hour on my skin, most of the heart notes have faded, and spicy cedar is all that’s left. That, too, vanishes within four hours or so, leaving just a trace of stubborn musk. Despite the prominent “féminité” in its name, Féminité du Bois is firmly unisex. In fact, I know some women who might reject it because it feels too masculine.

The latest version of Féminité du Bois, in the rectangular spray bottle, is definitely Féminité du Bois, no doubt about that, but it feels like a photograph of the fragrance instead of the real thing. I wore it dumped from a sample vial, and that might have made a difference, but to me it smelled less dimensional, flatter. It didn’t carry as mighty a cedar tingle; its peach wasn’t as velvety; and the spices didn’t prickle and soothe like the vintage version. Still, it was Féminité du Bois, and if you aren’t spoiled by having an older bottle, you just might love it as much.

Serge Lutens Féminité du Bois Eau de Parfum’s official retail price is $135 for 50 ml, but it’s less at some online retailers than others. For information on where to buy it, see Serge Lutens under Perfume Houses.