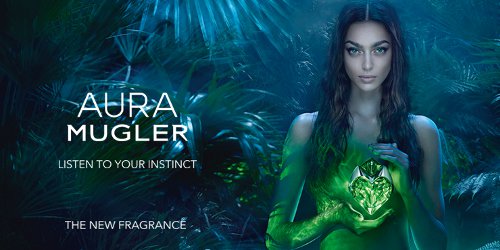 Aura is the latest pillar from Thierry Mugler (I know, I know, it's Mugler now, not Thierry Mugler, but my brain is not quite ready to make the switch). I have an ambivalent relationship with the brand's feminine pillar fragrances. Their debut fragrance, 1992's Angel, was a masterpiece, but not one I want to wear. I really like a few of the flankers, though, and have almost bought Angel Liqueur de Parfum any number of times. I thought Angel Eau Sucrée was fun and I thought Angel Muse was fantastic, but I didn't buy either of those either.

The success of Angel is often attributed to its unusual (at the time) overdose of patchouli and candy; Alien followed in Angel's footsteps with an overdose of jasmine, vanilla and cashmeran. I did not love Alien but I didn't really hate it either. If I had found it more appealing than I did, I probably would have tried more of the flankers.

Womanity (2010) broke with tradition, perhaps — it struck me as relatively subtle, and seemed to go for contrast rather than overdose. I found it likable if not as interesting as it should have been, and certainly not as interesting as Angel or Alien. It does not seem to have sold very well.

And now we have Aura. The Mugler folks assure us that we are back to overdose:

All MUGLER fragrances are excessive and addictive, and AURA MUGLER is built on a dual pulsation, a double overdose...1

The double overdose is supposed to be composed of tiger liana and rhubarb leaf (other notes: orange blossom, bourbon vanilla and wolfwood), and perfumers Daphné Bugey, Amandine Clerc Marie, Christophe Raynaud and Marie Salamagne have whipped up a green oriental that fulfills the excessive requirement, at least: Aura is loud. The opening is also unusual — it smells like a blend of camphorous toothpaste2 and tropical flowers, or more precisely, a perfume intended to evoke tropical flowers, since it has an overtly synthetic edge. Many reviewers mention the lovely note of rhubarb early on, but I hardly notice it until the toothpaste subsides a bit, then, yes, there is a fruity rhubarb, very green, very sharp, a little sour and a little tart. Maybe not an overdose, but it's there.

The heart is a (still loud) tropical floral with plenty of vanilla, lots of green, and a lingering hint of something like wintergreen. Daphné Bugey describes the tiger liana:

It was used for many years in Chinese medicine. It's the roots that are extracted from the plant, and it took us 10 years to register the ingredient and be able to use it in perfume - and now it's exclusive to this new Mugler fragrance. It combines this botanical and animal aspect which is the heart of the story, it has the addictive scent of sugared almond and vanilla but it is also quite smoky.3

And yes, there is a slight hint of smoke in the early dry down, along with a woody vanilla base. The smoke gathers intensity later on; while it never reaches alarming levels, the smoke and the camphor combine to keep Aura, which is otherwise sweet and a bit creamy, from qualifying as a foody / pudding comfort scent. Just as well, we've plenty of those already.

The lasting power is amazing. You might want to try it on a blotter first.

Verdict: Job well done. Aura doesn't smell like a dupe of anything else I can think of. It's a good fit with the image of Zhenya Katava working her way through a neon-flecked jungle in the ad campaign, and it is just loud and odd and polarizing enough to seem like a good fit with the Mugler brand in general. To my mind, it's far easier to wear than Angel. Still, speaking for myself (and my wallet), no sale. I do like Aura better than Alien, and I found it far more daring and unusual than Womanity,4 but I didn't fall in love. I will be interested to see what they do with flankers, though, and I've taken so long to try Aura that there is probably already one on the way. 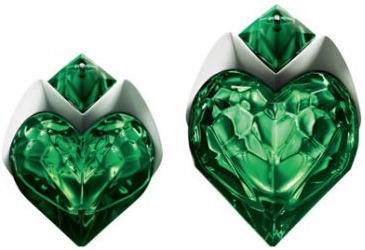 Thierry Mugler Aura is available in 30, 50 and 90 ml Eau de Parfum and in matching body products.

3. I also used this quote in the fragrance announcement and it originally came from Sunday World, but the article does not seem to be online.

4. Although I should add that that's not the universal take: The Candy Perfume Boy finds Aura the tamest of the lot. He does love it, though.