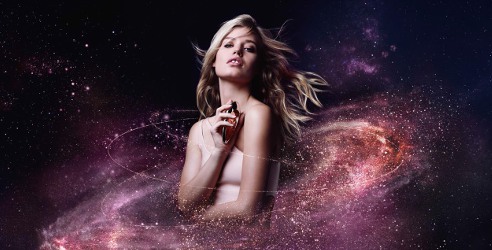 Perfumanity would seem to generally agree that Thierry Mugler does better than most when it comes to flankers. The A*Men flankers, especially the "materials" series (A*Men Pure Havane, A*Men Pure Malt, A*Men Pure Coffee, A*Men Pure Wood and the latest, A*Men Pure Tonka) have plenty of avid fans. On the women's side, I still find myself wavering, years later, over a purchase of the best-Angel-yet, Angel Liqueur de Parfum. Meanwhile, Angel Eau Sucrée, released as a limited edition again this spring (for the third year running), makes a decent young-slash-fun variation on Angel now that Angel Innocent and its various flankers-of-flankers are no longer with us.1

Angel Muse is the newest in the collection. It comes with a splashy ad campaign and hashtag (#HateToLove), and the perfumer, Quentin Bisch, talks about his passion for video games, so you know it's geared towards youth. They are calling Angel Muse a 'gourmand vetiver', and I suppose maybe it is, but I'd call it a 'gourmand vetiver Angel', that is, it's still quite recognizably Angel, with a 'gourmand vetiver' facet, if you'll pardon the ad-copy-speak.2 And it's young and new, but not sanitized or dumbed down. Mugler has made clean, easy-to-wear variations on Angel, Angels that you could wear in the middle of an August heatwave, but this isn't that. It's an intermediate Angel — easier-to-wear than the original, yes, but with plenty of backbone of its own.

Angel Muse opens on fruit salad, heavy on the grapefruit, liberally laced with pink pepper. Its Angelness asserts itself slowly but surely: a whisper of patchouli in the early stages gathers force as it wears on skin, but it's a shade cleaner than the patchouli in original Angel, and it keeps its voice mid-level so as to share the stage with a (likewise somewhat clean-ish) vetiver. The hazelnut cream does its job of rendering the whole a gourmand, but again, it's not at the sugar level of the original's cotton candy and caramel. The dry down is warm, nutty, vanillic, a bit spicy, and rather cozy. It's slightly bitter, and every so often I catch faint whiffs of the dry cocoa powder that was featured, far more generously, in the base of Angel Liqueur.

I would call it a middle-weight and it's certainly not as dark and heavy as Angel, then again, it does have some sillage: my husband noticed it as soon as he walked in the room where I was wearing two sprays (really, every Angel should be available in an optional splash bottle for wimps like me). The lasting power is excellent, albeit still not quite that of original Angel. A man, especially a man that would wear Dior Homme or Valentino Uomo, could easily wear it.

Verdict: Impressive. If I could add an Angel to my collection, it would still be the Liqueur de Parfum, but they've done a fantastic job on this one. Angel Muse is exactly what it should be — it's delicious, it's more modern than Angel, it's more serious and sophisticated than Angel Eau Sucrée, and it's just enough weird to please perfumistas, not so much as to turn off everyone else. And, it's far more distinctive than the Angel-spawn generated by other brands over the past few years (yes, I'm looking at you, Lancôme La Vie Est Belle). 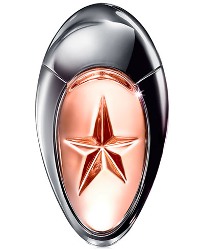 1. And Angel Innocent was before my (perfume) time, so I cannot comment on how it might compare to Angel Muse.