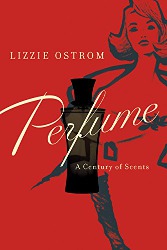 Halfway through Lizzie Ostrom’s Perfume: A Century of Scents, I set down the book and wondered who it was written for. Not the perfumista. Ostrom’s essays on the book’s 100 featured fragrances often leave out key lore or information on a perfume’s place in the pantheon, its history, or sometimes even how the perfume smells. Then it occurred to me: the book isn’t about perfume, it’s a telling of social history through perfume.

Perfume: A Century of Scents presents ten fragrances for each of the twentieth century’s decades and an essay introducing each decade. Each fragrance gets a Thurber-style illustration and a snappy nickname. The book starts with Houbigant Parfum Idéal in 1900 (“the Queen-Bee Perfume”) and ends with 1996’s Demeter Dirt (“the Un-Perfume”).

When I say that the book isn’t really about perfume, I mean that, for instance, in Ostrom’s essay on Diorissimo you won’t find the story of Roudnitska’s study of his patch of lilies of the valley, or even much of a description of how the fragrance smells. Instead, once you’ve waded through a page of how tough it is for men to buy perfume for their wives, you get a comparison of Diorissimo to Grace Kelly and Dior fashion’s “modest, appealingly feminine lines.” It's a comment on the times. Similarly, the essay on Youth Dew ignores how it was one of the first fragrances women bought for themselves, or its queer relationship to Tabu, and talks about the smell of retro suburbia. I don’t note this to put the book down — I enjoyed these takes on each fragrance — but rather to let you know what you’re getting into.

Also, in the “wow, this is fabulous” or the “please, no” category is the book’s voice. At her best, Ostrom is Auntie Mame, waving her bejeweled cigarette holder as she weaves a hilarious and on-the-nose story about a particular fragrance’s place in history. I laughed out loud more than once. However, I can imagine some people growing weary of the style and zoning out through the pages of semi-colons, dependent clauses, and adjective-laden chattiness.

Perfume: A Century of Scents is packed with great stories and fascinating nuggets of information. Did you know that Michael Jackson wore Bal à Versailles? Or how about Paco Rabanne’s briefing for Calandre, quoted via Michael Edwards, which instructed perfumers to imagine a story where a man “takes the girl for a ride along the seaside…He stops in a forest…there he makes love to her on the bonnet of the car”?

That said, in my casual reading, I stumbled over a few errors. For instance, the book lists Sophia Grojsman as the nose behind White Diamonds, when it’s Carlos Benaïm and Olivier Gillotin. Old Spice’s debut falls under 1937, which is true — for the original Old Spice, a women’s fragrance. This matters, because her description is about how Old Spice is the ultimate “nice guy” male fragrance. Ostrom writes about the “Normandie” cruise ship and Patou “Normandy” in the same sentence. They're both named Normandie.

But for many people settling down with the book on a cold afternoon with a pot of tea, these are nitpicking details. Most people will take in the book a few essays at a time, enjoying Ostrom’s wit and potpourri of anecdotes. This is how I recommend reading it. Pretend you’re at a cocktail party in the company of a chatty magpie of knowledge with an interest in fashion and a fat stack of vintage magazines at home. With this approach, Perfume: A Century of Scents will be a fun companion over your holiday break.

Perfume: A Century of Scents by Lizzie Ostrom is available now in the UK. The US edition (Pegasus Books) will be available on December 6, 2016, and is $26.95 hardcover.