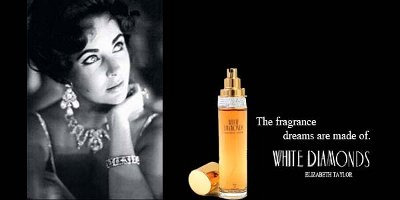 It's disconcerting to consider Elizabeth Taylor White Diamonds, a perfume supposed to represent the actress. After all, which Liz are we talking about? The ingénue of National Velvet? The tempestuous, alcohol-sodden seductress of Butterfield 8 and Who's Afraid of Virginia Woolf? The Senator's wife, depressed and overweight? Or maybe the laid-back Mrs. Fortensky?

I knew White Diamonds was wildly popular, but I expected it earned its sales among soap-opera-watching, chain-smoking elderly ladies. I figured it would smell of sharp aldehydes, cheap white flowers, and rubbing alcohol. Boy was I wrong. White Diamonds Eau de Toilette is a gentle white floral chypre with a soft, clean feel. Spring-sweet and soapy fresh. Classic, really. I'm hooked.

Cosmetics business analysts were skeptical. How would White Diamonds fare against its biggest contenders for the holiday season, Estée Lauder Spellbound and Calvin Klein Escape? Sure, it was more high-end than Passion, but could the market bear two fragrances from Elizabeth Taylor? Thomas Maloney, Vice President of marketing for Parfums International was confident. He said of White Diamonds, "It will entice another consumer, girls aged 16 and women aged 55."1 (Judging from the print ads, two of which featured Burt Reynolds and Kenny Rogers, they didn't bother to market to the 16-year old.)

White Diamonds was a blockbuster. It raked in $35 million that first fall, knocking out the competition in most markets.2 Some experts attributed White Diamond's success to Elizabeth Taylor's in-store visits, and others cited the multiple gift sets available, including the special set with a tennis bracelet and earrings for $250.3

Me, I think it was the universality of the fragrance itself that won the sweepstakes that year and that continues to earn White Diamonds strong sales twenty years later. Perfumer Carlos Benaïm developed White Diamonds. It has top notes of lily and verdi (Italian for "greens"); a heart of rose, narcissus, jasmine, and tuberose; and a base of oakmoss and sandalwood.

White Diamonds Eau de Toilette goes on with a burst of soft, round aldehydes giving lift to a sweet, white floral mix that I can't detangle. Clean musk shows up right away, too, smelling like a fancy guest soap. A hint of dirty vase water keeps the fragrance from smelling too much like laundry detergent. After fifteen minutes or so of warming on skin, White Diamonds settles into quiet to moderate sillage. I don't get much oakmoss or sandalwood at all. The clean musk and sweet flowers soldier on to the end of White Diamonds' wear several hours later.

Often when I'm wearing something to review I'll put it on for part of the day, then switch to something else I'd really rather be wearing. With White Diamonds, I found myself spraying it on in the morning, when I got home from work, then again before bed. It never overwhelmed, never insisted. When I proffered my scented forearm to people for sniffing, I almost invariably heard, "I like it," in return.

Like puppies or ice cream sundaes, White Diamonds is easy to love. It's clean, effortless, and innocent while still being just a little, comfortably old fashioned. No, it doesn't bust apart the perfume world with its one-of-a-kind take on fragrance. It's not daringly sexy or freakily fascinating. It's just plain easy. Sweet, fresh, and clean.

So what does all this have to do with Elizabeth Taylor? I think the one quality that unites the different Lizs through the years is a resilient hope, her ability to pick herself up after whatever calamity beset her and plunge forward, trusting things would be better the next time. White Diamonds reflects that durable innocence.

Each time Elizabeth Taylor married, she must have thought this would be it, this would be the man who was strong enough, right enough for her. She put her money and celebrity behind the fight against HIV and AIDS in the mid-1980s when many people still ignored what they considered the "gay" disease. It's hard to understand today what a brave stance that was. Over the years, she drowned her disappointment in alcohol and pills and food, but resurfaced to fight the good fight, whatever that meant to her at the time.

Whether it was the conscious design of the perfumers, Taylor's input, or a fluke of marketing, White Diamonds to me sums up the passionate, hopeful innocence Elizabeth Taylor embodied and that so many of us feel at some point in our lives. No, it's not an expensively produced perfume (although I'd love to smell it with high quality ingredients), but I've been loving it, and I've ordered a big bottle of the Eau de Toilette for spraying my sheets and myself when life gets me down.

Elizabeth Taylor White Diamonds is widely available online and at drug stores and department stores. The Eau de Toilette can be found for less than $15 for 30 ml. If you've tried the Eau de Parfum or Parfum, please let us know how it compares to the Eau de Toilette.