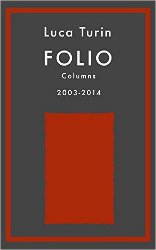 If I were Luca Turin (forget for a moment that this is a review of his book), I might start this article with a story seemingly unrelated to Folio Columns: 2003-2014. For example, maybe I’d tell you about standing at a confiserie window as a child, pondering the tiny green leaves or dot of red or praline flower adorning each bonbon and guessing at its relationship to the candy’s hidden center. Once you’d finished the article — which has nothing to do with chocolate, by the way — you’d understand that I’d delivered a curious, but apt, way to explore something entirely different.

Fans of Turin’s writing already know this roundabout way of addressing a subject. (They also know to expect a smattering of evocative metaphors as well as frequent references to classical music, scientific theory, and rare automobiles, no matter what the essay’s subject is.) If you enjoy Turin’s perfume reviews in his and Tania Sanchez’s Perfumes: the A-Z Guide for their style at least as much as their insight on fragrance, you’ll definitely want a copy of Folio Columns.

Folio Columns is a collection of Turin’s mini-essays for the Swiss magazine, NZZ Folio. The essays fall into two categories: perfume articles from the magazine’s Duftnote section; and “Either/Or” pieces that present thoughts on things like “war vs. peace,” “flats vs. heels,” and “Liszt vs. Chopin.” Also included are four feature essays not about perfume or face-offs. Altogether, the book holds 139 essays, most of which I’d estimate are about the length of a long blog post, plus a lengthy preface by Tania Sanchez, Turin’s wife and co-author of Perfumes: the A-Z Guide. Turin wrote the essays in English, and they were translated into German for the magazine. Here, they’re in their original English.

After reading Folio Columns, I know Turin and I will never see eye to eye on certain things. (Despite what Turin says, it would be a sad life without tartan and old armchairs.) Plus, Turin’s life is a world apart from mine. He grew up with bowls of Alba truffles on the sideboard, classical music on the stereo, and a mother who wore Diorama. I grew up in a trailer in the woods on powdered milk purchased with food stamps. He's a scientist, and I can barely remember my phone number. He's fluent in three languages, and I'm proficient in Pig Latin.

But in reading Turin's essays, I don’t feel condescended to. I feel that I’m reading a scientist-aesthete’s honest blend of intellect and passion. When Turin criticizes something (check out the book’s review of the movie Perfume), it doesn’t carry the sour tang of snark. Furthermore, I often come away with something to think about (who would have considered that war has an upside, for example?). Each essay is a crafty blend of style and thought, peppered with enticing metaphor and a glimpse into a world messy with children and television and traffic, but glamorous with Sauternes and perfume and foreign locales.

To finish this review in time, I pounded the essays at 25 or so a throw. I don’t recommend it. It’s too much voice and thought at a time — too rich, like ravaging a box of bonbons (to return to the confiserie idea) and ending up swearing to a life of kale and seltzer water, or, in this case, plain-talking journalism. (I can feel the book’s effect on this review, even. My sentences are way more baroque than I usually write them.) I plan on rereading Folio Columns later, bit by bit, maybe only spending the half hour or so at a time that I’d pass with a modest tot of Scotch. The essays need breathing room.

Whether you read them fast or slow, be sure to check out the collection’s last essay, my favorite, called “The Knight.” Not only does it conclude with a juicy footnote, it whets my appetite for something I'd like to read someday: Turin’s memoirs.

Folio Columns: 2003-2014 is available on Kindle for $6.99. (You don’t have to have a Kindle device to read Kindle books, by the way — the Kindle app is free and can be used on tablets, computers, and smart phones.) A paperback version is $13.00 at CreateSpace (and will be on Amazon soon).

The Little Book of Perfumes ~ Q & A with Luca Turin & Tania Sanchez, part 2
The Secret of Scent: Adventures in Perfume and the Science of Smell by Luca Turin
The Emperor of Scent: A Story of Perfume, Obsession, and the Last Mystery of the Senses, by Chandler Burr