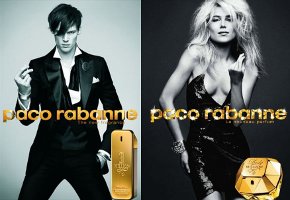 Fashion design house of Paco Rabanne, who was born in Spain and came to France during the Spanish Civil War. His first fashion collection, featuring futuristic designs made of plastic and metal, appeared in 1966; Rabanne subsequently became well known for his chain mail mini dresses, disposable paper clothing and the like. After shuffling through several designers, the fashion house went on hiatus for a time in the late 2000s; it returned in 2011. In 2013, Julien Dossena was named creative director.

The Paco Rabanne fashion and fragrance businesses are owned by Puig.

See all articles on Now Smell This tagged Paco Rabanne.

Read Paco Rabanne Returns With an Edge at the New York Times.