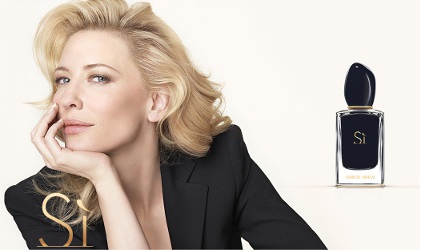 A new Sephora just opened directly on the route of my daily commute, so I stopped in last week to check it out and try a few new fall fragrances. My eye was caught by the sleek black bottle of Giorgio Armani Sì Intense, a flanker to 2013's Armani Sì. It was released elsewhere in 2014, but it just arrived in the United States this month.

The promotional boilerplate for this perfume reads, "The new version of Sì is designed for a strong and passionate woman who is brave and not afraid to take risks. Such a woman is conceived as very charismatic, confident, independent and sophisticated." It was developed by perfumers Christine Nagel and Julie Massé, and its composition includes notes of black currant, mandarin, bergamot and freesia; rose de mai, neroli, davana and osmanthus; patchouli, vanilla, ambroxan and woods.

When I sprayed Sì Intense on my wrists at Sephora, I swooned with pleasure and momentarily considered purchasing a bottle then and there. (I didn't; common sense compelled me to request a sample vial instead.) Sì Intense's initial cassis note reminded me of Calvin Klein Euphoria (which I still love) and the successive notes of plush rose and creamy vanilla brought to mind Bond no. West Side 9 (ditto). Is it a "modern chypre," as its promotional copy tells us? No, it really isn't; I'd describe it as more of a "fleurmand," with its floral and sweet notes. It's sweeter than you might expect for the Armani brand or for Cate Blanchett (the "face" of Sì). It's also fairly linear, getting slightly woodier after an hour but never changing too much.

My main complaint is Sì Intense's claim to being "richer than the original," with a 20% concentration of fragrance oil (versus the typical 8 - 15% for Eau de Parfum). Well, it's certainly different from the original Sì, which smelled to me like a pretty but bland mix of freesia, orange blossom and sheer musk. However, I found its longevity very disappointing for any Eau de Parfum, let alone one that claims to be, well, intense.

Basically, I'm glad that I didn't give in to my initial impulse to buy Sì Intense on the spot; it's briefly very enjoyable, but I'm at a point in my perfume life where I demand more from my fragrances. If it lasted a long time on my skin, or if it were half the price, I'd say "yes."