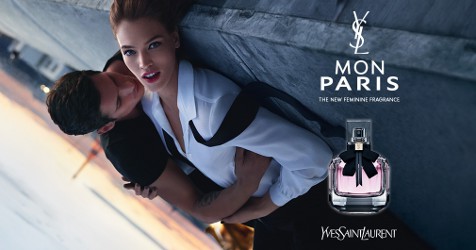 Yves Saint Laurent updated their 1983 classic rose, Paris, with Parisienne, a vinyl-accented modern rose, in 2009. I liked Parisienne, but I don't think it ever gained any sort of major traction with consumers despite the steamy Kate Moss advertising. So now for 2016 we have Mon Paris, which is "about vertigo, love that makes you lose your senses". The advertising features plenty of kissing, but little if any writhing, and Crista Cober keeps her clothes on — it takes Mon Paris a small step closer to the original underpinnings of Paris as a fragrance about roses and romance.

There are no roses in the 2016 advertising, though, which is your first clue that Mon Paris, the juice, isn't an updated version of Paris, the juice. It's something entirely new, a "white chypre"1 or a fruity floral chypre with white musk, whichever terminology you prefer. It starts with plenty of fruit (raspberry, strawberry and pear, along with bergamot and calone), but the pear dominates, and the whole is relatively sheer and watery, so while it's juicy and berried and sweet, it has that more-clean-than-jammy feel that pear sometimes lends.2 Of the florals in the heart (peony, datura, jasmine, orange blossom), the peony is the main player, and again, it is kept at a relatively transparent level, so the overall feel is pink and modern and sweet, but clean.

The "chypre" base (three white musks, plus ambrox and reportedly two kinds of patchouli, from Indonesia and Guatemala) is, in keeping with the modern style, likewise clean and pale, and while it's not quite so clean as to smell like detergent, it's still pretty darned clean, and the patchouli, whatever its exotic origins, is the usual molecular fraction that need not worry anybody.

The lasting power is just fine.

Verdict: Mon Paris is a wearable modern pink fruity floral, youthful and sweet. It is not so sweet as to cross over into the gourmand category (it is not as sweet or loud as Dior's new Poison Girl), and it is certainly not so passionate or sophisticated as its advertising (of course, few fragrances are). It is competently done, but the pink fruity category has not been neglected on perfume counters lately, and perhaps as a consequence, I found Mon Paris rather dull and faceless. It was probably a mistake to review it the week after Poison Girl — in a few more weeks, the two scents will be a big pink fruity blur in my mind.

I will leave you with brief quotes from the only two reviews currently on file at MakeupAlley, and you can take your pick:

For my tastes, Mon Paris is 10X better than classic Paris & 5X better than Parisienne. IMHO, this series has gotten progressively much better -- with modern Mon Paris being best, by a landslide. 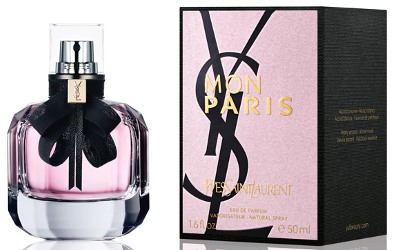 1. Stephan Bezy of Yves Saint Laurent Beauté told Women's Wear Daily (5/27/2016) it was a white chypre and says they invented this new category with Mon Paris. I propose a more accurate category name: the pink chypre. I'm afraid Yves Saint Laurent did not invent the pink chypre and offhand I couldn't say who did, but it's been around since at least Miss Dior Chérie, 2005.

2. For pear haters, and yes, I am among their number, the technical term is "pear shampoo".