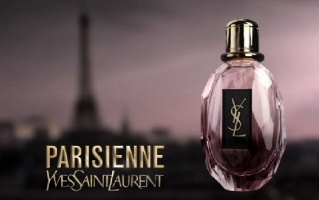 Yves Saint Laurent's latest, Parisienne, is aimed at a woman too old for Elle but too young for the harder-hitting, from-another-era classics Opium and Paris. A woman in her 30s, in other words. What else do we know about this woman? Well, she's free, in body and spirit. She's not from Paris, but Paris has adopted her because she knows how to love and how to live. She's out at the break of day in last night's evening clothes, but that's not scandalous, it's free (or so says she).1 If you're wondering what she looks like, well, she looks like Kate Moss, in black leather, writhing about in the back of a car whilst having flashbacks about writhing about on a bed.

Elle was, I thought, nice enough if rather predictable, encompassing as it did elements from all the then-prevailing trends in mainstream perfumes for young ladies. It was hard to know what to expect from Parisienne. The name and the bottle design are obviously derived from the original Yves Saint Laurent Paris fragrance, which launched in 1983, and the scent is credited to perfumer Sophia Grojsman, who created Paris (for Parisienne, she was working in conjunction with Sophie Labbé). The notes — vinyl accord, cranberry, blackberry, damask rose, violet, peony, patchouli, vetiver, sandalwood and musk — sounded like they might indicate a modern variation on Paris, and some sources called it "an edgier, younger scent than the brand’s iconic Paris fragrance".2 But mentions of Paris are conspicuously absent from the Yves Saint Laurent website and from the press release for Parisienne, and Yves Saint Laurent has already done umpteen variations on Paris for their yearly spring flanker series, so I figured it would probably be distantly related at most.

As it turns out, the nod to Paris is obvious enough, but Parisienne is nothing like the Paris flankers, which were mostly sheer, fruity, happy-go-lucky variations on the Paris theme. Parisienne opens on a frothy violet-rose with tart berry. On paper, the berries seem to hang around forever, and Parisienne feels bright and cheerful; on skin the berries fade away faster, but then, so does the rose: Parisienne is not the emphatic floral that Paris was, and after the fruits calm the feel is dusky, almost wistful. If you look for it, the "vinyl accord" is quite noticeable in the early stages, then it seems to fade and reappear for the next hour or so. The base is darkish musky woods, with that ubiquitous cleaned-up patchouli; it's all smoothed over by powder. Parisienne gets earthier as it dries down, and it eventually verges on edgy, but it doesn't quite get there; despite the vinyl and the earthy notes, it's a subdued fragrance, and in the end, more clean than not. The dry down is obviously meant to be sexy, and perhaps it is, but it's just not the bold sort of thing you'd expect someone writhing about in black leather in the back of a car to be wearing.

Parisienne is not as lush and rich as Paris, and it has none of Paris's exuberance. When I reviewed Paris, I said that while "Paris speaks in pastel tones, the pastels are done in technicolor — it’s extraordinarily feminine, almost ironically so, and it’s entirely romantic, but there isn’t anything girly about it." Parisienne isn't girly either, but it loses the technicolor: the pastels here are muted and greyed, and a good match for the dim smoky pinks of the advertising campaign. It feels simultaneously retro (you don't see that many powdery rose-violet fragrances launching in Macy's these days) and modern (Paris smelled like at least some of the materials were derived from nature; Parisienne has a decidedly straight-from-the-lab feel). Paris is about romance, Parisienne is about something else — what, exactly, I'm not sure, but I'm having trouble connecting it to Kate Moss in black leather.

As is so often the case with these sorts of projects, the experience of wearing Parisienne over several weeks mostly served to remind me why Paris is still so widely admired after 25+ years on the market. Parisienne, well, I like it. It's pretty, it's wearable. It's not like everything else on the market, and it's just off-kilter enough to be more interesting than many. It's certainly more interesting than Elle, or anything else Yves Saint Laurent has done recently. I didn't fall in love with it, and I do think that if you're after an offbeat (or sexy) sort of rose, you can do far better (as with many fragrances that I think are almost great, I couldn't help redesigning it in my head, or imagining the more interesting mods that were discarded in favor of this one). But I'm rooting for Parisienne to do well, if only because it seems rather an odd choice for something that Yves Saint Laurent hopes to become "a second pillar...alongside its blockbuster Opium".3

1. The target market for Parisienne via Women's Wear Daily; the description of the Parisienne woman via the press materials, ysl-parfums and ysl-parisienne.