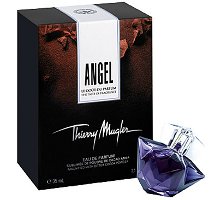 I know, I know, we're all sick of flankers, right? The worst case scenario — maybe, the most common scenario — is a trite variation on a fragrance that wasn't all that imaginative or important to begin with, followed by two or three or eleven more, evenly spaced over the coming months and years, whether the world needs them or not. Eventually, inevitably, we get the flankers of flankers, with their vaguely ridiculous names as though they just could not stop themselves — Victoria's Secret Sexy Little Things Noir Tease Temptation, seriously?

But then there are those rare cases where we get creative and just-plain-fun twists on iconic fragrances. Props to Thierry Mugler on that score; they've done a great job over the years. The "Pure" series of A*Men flankers (Pure Coffee, Pure Malt, Pure Havane) have been highly enjoyable, and have accomplished exactly what flankers ought to accomplish: they've made me appreciate the original A*Men all the more. The Angel Garden of Stars series (Peony Angel, Lily Angel, Violet Angel and Rose Angel) did the same for many people, but did not manage to break through my long-standing dislike of the original Angel. Then lo and behold, they got me too, first with Angel La Part des Anges and then with the similar (and more affordable) Angel Liqueur de Parfum. If you had told me five years ago that they'd ever make an Angel I wanted to own, I'd have shaken my head in disbelief.

Now they've done it again. The new Angel Taste of Fragrance / Le Goût du Parfum (both names are on the packaging) is part of a larger collection that also includes Alien, Womanity and A*Men, and that bills itself as "a daring collision of luxury fragrance and haute cuisine". It's all very involved and includes a chef and recipes and whatnot, but what you need to know for Angel is that they've amped up the chocolate notes with bitter cocoa powder. Once some really high-pitched berry and citrus stuff in the opening wears off (I mostly ignored it, and it doesn't last all that long), it's all about the cocoa, and yes, it really is bitter cocoa: Angel Le Goût is a gourmand, and it's sweet, but think of a sophisticated truffle rolled in cocoa powder, not a Hershey's bar.1 Or maybe don't think of a candy at all — it's less dessert-like than you might expect, and to drive home that point, the recipe associated with the fragrance is not a chocolate cake or some such, but sautéed duck breast in a pink praline crust, beets, turnips and raspberries, beet and citrus sauce with intense Mexican mole sauce (and do let us know how that works out after you make it).

Angel Le Goût is nearly linear once it settles on my skin, and as with the Angel Liqueur de Parfum, it's recognizably Angel, but it's also as smooth and mellow as can be, with all the jagged and jarring elements of the original polished away, so that it wears almost like a woody comfort scent. It's rich and deep, and quite long-lasting, but the sillage is maybe a bit quieter than that of the original. I cannot decide if I like this one or the Liqueur de Parfum better, and I do wish they'd do a little holiday coffret with the two of them in very small travel sizes. But that never happens, does it?

1. If what you're after is a Hershey's bar sort of thing, try Demeter Jelly Belly Hot Fudge Sundae, or maybe the old standby Serendipitous by Serendipity 3.