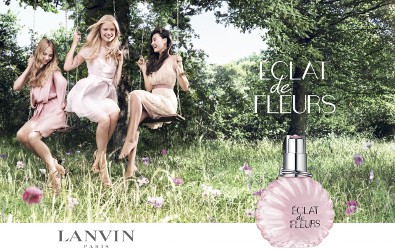 Lanvin recently launched Éclat de Fleurs, a new flanker to join the "family" of the classic Arpège and 2002's Éclat d’Arpège. Éclat de Fleurs "conjures up the euphoria of a sunny stroll filled with flowers and joy," and it's a fruity floral with notes of pear, freesia, rose, jasmine sambac, white musk and sandalwood, developed by perfumers Anne Flipo and Nicolas Beaulieu.

The bottle for Éclat de Fleurs echoes Arpège's signature ball-shaped flacon, and it's engraved with a ribbed pattern that evokes the flower petals of the marguerite — another word for daisy, and the name of Jeanne Lanvin's daughter. Visually, Éclat de Fleurs fits in with its "mother" and older "sister" — but does it have any olfactory kinship? No and yes —- if you're a diehard fan of Arpège, this one probably won't interest you much. If you've enjoyed the cheerful lemon-and lilac theme of Éclat d’Arpège and its various limited edition flankers, however, you may be more open to this fruity-flowery new sibling.

So how does it smell? I expected Éclat de Fleurs to be all flowers, based on its name. The freesia and rose are in there, and they're very sheer and contemporary. The real star of this fragrance, however, seems to be the pear — it starts off strong and it never really leaves. If you love pear notes, you'll be happy; if you really, really don't like pear, this might ruin the fragrance for you. The rose and freesia and the very clean jasmine are lifted by an aldehydic fizziness, and the whole thing feels nicely radiant. The musk in the base is all but transparent. This scent-experience isn't meant to be a glamorous evening event, like Mama Arpège; it's just a girls' day out, maybe a weekend brunch.

As far as pink springtime scents go, this one is more substantial than others I've tried, like Fendi Fan di Fendi and Escada Joyful. I'm wondering how it would compare to this year's Marc Jacobs Daisy Blush, which I haven't tried yet. In any case, Éclat de Fleurs delivers on its promise of being a youthful, euphoric take on springtime fruits and flowers. It's like a the wispy pastel dresses in the ad for this fragrance — I'm not the target audience, but I can understand its appeal.