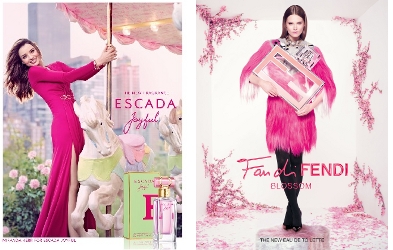 Just because it's now officially fall in my part of the world doesn't mean that we're required to break out our deeper, spicier fragrances right away, right? Not when there's still a fresh crop of pink perfumes in pink bottles to be sampled! I tried two new-ish ones this week, with mixed results.

First up: Escada launched Joyful, its latest fragrance for women, late in the summer. It's a fruity floral whose notes include blackcurrant, melon, mandarin, peony, magnolia, nectarine, violet leaf, honey and sandalwood, and its ads feature model-of-the-moment Miranda Kerr riding a merry-go-round. (At least, she's one of the models who seem to be everywhere right now.)

Escada hasn't released anything but upbeat fruity florals in a long time, and Joyful fits the usual profile. I have to say, however, that I liked this one much less than Especially Escada Delicate Notes. That one was an inoffensive sheer rose scent; this one is much fruitier, and just feels somehow blunt and sour. The melon and blackcurrant are initially noticeable, but they become less distinct from one another as the fragrance develops and the whole "fruit" concept takes on the generic quality of an air freshener. The florals are barely detectable to my nose. The dry down adds a soapy musk to the fruit-mix and (wouldn't you just know it?) lasts a long time on skin. 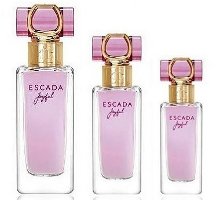 Basically, Joyful feels oddly joyless to me, and just about as synthetic as the accompanying commercial and print ads — their final image evokes New York's Central Park carousel, but the footage was actually shot on Roosevelt Island, on a merry-go-round set built near the former Strecker Memorial Laboratory. Why didn't the Escada team decide to film in the real Central Park, or otherwise just do the whole thing in a studio? Why do I even wonder about things like this anymore?

Fan di Fendi Blossom smells slightly ozonic when sniffed straight from the bottle, but on paper it behaves more like it should. Its opening is a radiant cluster of grapefruit and rose notes, boosted by the pink pepper. The pear (specifically, "Nashi pear") has a melon-like tinge, and the pink-and-white floral notes are pale and slightly sharp. This fruit-and-flower blend reminds me for a while of some shampoo scents, because it's so bright and clean; then it loses some color and dries down into a lightly vanillic skin-scent base. It's definitely "front-loaded" to appeal to potential customers at the perfume counter, and it's less interesting as it unfolds. 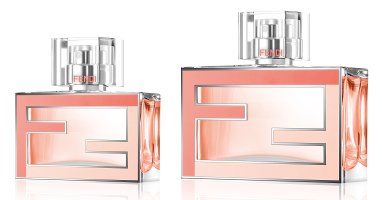 This fragrance appears to be aimed at a "youthful" customer who likes office-friendly, non-gourmand florals; you'll probably enjoy it if you're a fan of L'Occitane's various Cherry Blossom scents or any number of mass-market best-sellers like the Marc Jacobs collection. In fact, I could pretty much re-use Robin's summary of Marc Jacobs Lola here: "Like so many of the department store fragrances released over the past few years, [Fan di Fendi Blossom] smells instantly familiar, and it no longer seems worth taking the time to figure out just which other fragrances it smells like." As for me, I personally prefer "regular" Fan di Fendi. Actually, I truly prefer the original Fendi fragrance fragrance, a spicy heavy-hitter from the 1980s, but that one is gone forever. Perhaps Fendi's Furiosa, scheduled to be launched later this fall, will appeal more to my own tastes.

Have you tried either of these fragrances? What did you think?