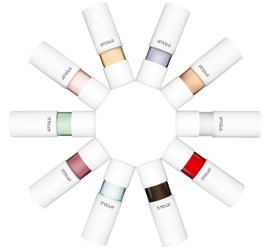 American designer Derek Lam recently released a new collection of ten fragrances, a partnership with Butterfly Beauty (the producer and distributor of the Elizabeth and James line) and his brand's first official foray into the perfume world. 10 Crosby Street is Lam's Manhattan business address, and it inspired the name of his more affordable diffusion collection, which offers modern fashion with a "calculated simplicity and thoughtful detailing" for a younger "downtown" woman. Now the address is also being applied to these fragrances: "1 STREET, 10 STORIES, 10 CROSBY."

The 10 Crosby packaging has a fresh new look, with minimalist white cylinders and a rainbow of glass shades. The fragrances inside, however, are very much status quo. In their style and tone, they remind me of the wildly successful Marc Jacobs fragrance collection as well as some other diffusion lines. Of the five I've tried so far, all are linear and lightweight, and they're definitely aimed at the 18-30 demographic.

Each scent is accompanied by a short film, and you could even watch the films while sniffing the matching perfumes, as I've been doing this week. My thoughts?

THE FILM: An aging doorman at an upscale hotel goes rogue and indulges his fantasies of living in luxury.

THE SCENT: White musks, pure and simple. If you have fond memories of The Body Shop White Musk or Love's Baby Soft, you may love this designer milkweed-puff of a fragrance. Soap and talcum powder, very sheer and quite long-lasting.

THE FILM: A woman left alone after a break-up gazes into the mirror and then dances wildly to the strains of "I'm Nobody's Baby Now." Hey, at least she got to keep the SoHo loft.

THE SCENT: Magnolia and tonka bean. It's an inoffensive day-to-night "fleurmand" with warm vanillic notes under creamy florals. I wish it smelled more like the magic-realism conclusion of the film (roses and vines, settling dust).

THE FILM: A beautiful young woman finally looks up from her smartphone and has a life-changing revelation about her unsuccessful history of online dating. If only it were that easy, right?

THE SCENT: Peony and narcissus, with some uncredited pink roses underneath. This fragrance would fit right into a scent wardrobe that includes See by Chloé and her (sorority) sisters. Considering the message of the film and its song, it's an oddly conventional scent. Predictably, synthetically pretty. Almost more of a functional fragrance.

THE FILM: My favorite of the batch, because I'm a cranky middle-aged New Yorker who misses the "old" SoHo. A Crosby Street native remembers his parents' forbidden romance and his own childhood in the neighborhood.

THE SCENT: Apple and honeysuckle, very fresh and sweet. Maybe some kiwi, too? Emphasis on the "youth," in any case. A cousin to the DKNY Be Delicious family.  I should probably give up with the film connections...

THE FILM: An old-school hip-hop soundtrack ("Devotion" by Charizma & Peanut Butter Wolf) and two remarkably flexible male dancers throwing shapes in subway stations, on a beach, on a football field — and on Crosby Street, of course.

THE SCENT: Reportedly white mimosa and orris, but to me it smells like a citrus-musk shampoo. Maybe the two guys are going to shower when they're done dancing? It's the most unisex of these five, and the shortest-lived on my skin. 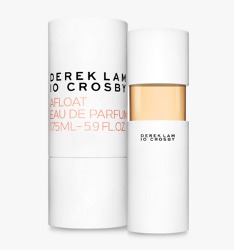 I'm going to try the other five fragrances (and view their films) soon. I think some of them may be a bit darker or richer — in any case, check back next week if you're curious.