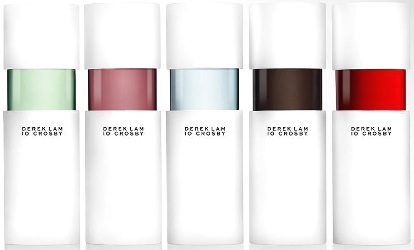 I'm back. Last week I reviewed five of the ten fragrances from designer Derek Lam's new 10 Crosby collection, and this week I'll be covering the other five. This collection, in case you need a refresher, is comprised of "10 distinctive, modern fragrances based upon one street, 10 stories, 10 moments—all inspired from the world seen and imagined outside Derek Lam’s window at 10 Crosby Street."

THE FILM: A downtown cabbie and a glamorous passenger bond during their respective romantic crises. [Ed. note: you can watch all five of the films here, and we posted the other five last week.]

THE FILM: If you were hoping for Melanie Griffith and Jeff Daniels, you'll be disappointed. It's the jilted dancing woman from the "Looking Glass" film, wearing the same satin athletic pants and open-mouthed expression, but she's left the duplex and now she's dancing on the street.

THE SCENT: Vanilla and cedar. Yes, this is definitely the vanilla perfume of the bunch. It has a caramel-woody aspect, like a muted Prada Candy, plus a dose of almond — yet it doesn't feel quite finished as a fragrance.

THE FILM: An awkward first date in a dumpling restaurant goes wrong, then goes right. This one made me hungry.

THE SCENT: Reportedly a jasmine-and-sandalwood oriental, but for some reason it reminds me of Frederic Malle L'Eau d'Hiver (but weaker and sweeter, and made from lower-quality ingredients). Ellipsis never achieves L'Eau d'Hiver's warm/cold enchantment, but I didn't mind wearing it.

THE FILM: Emotions ride high during a citywide blackout. With a magical plot device and "Girls"-style ambience and acting.

THE SCENT: Chai tea and osmanthus. It definitely has a black-tea note and a hint of some aromatic resin; the osmanthus adds a citrusy floral touch and keeps Blackout from skewing too masculine. However, everything fades pretty quickly after that bold opening. Like several other scents in the collection, this feels like it hasn't really been fleshed out into a finished fragrance.

THE FILM: A young woman who's just been dumped by her boyfriend gets drunk with her friends, then creates a bit of a scene on Crosby Street.

THE SCENT: Caramel and amber. The caramel is salted, and there's a surprise fruit note underneath, like strawberry creme filling. The dry down is a dirty cumin that will upset anyone who was hoping for a gourmand scent. (Said my husband: "That smells like body odor.")

(In case you've been keeping count, four of the films focus on romantic connections and four feature break-ups. Isn't there anything to do on Crosby Street except fall in and out of love? I could come up with ten different video ideas based on my own adventures in SoHo, and I don't even lead a very exciting life.)

So, there you go. The 10 Crosby collection is showing up in plenty of magazines this month, and I'm sure its colorful packaging and multi-media marketing will bring lots of initial interest. From what I've seen, I like Lam's clothing designs; I wish these fragrances had some of the fashion's sophistication and attention to detail. Instead, the whole thing feels a bit (pun intended) color-by-number.