Ashley and I are really into oils, and those were the notes we were really attracted to. — Mary-Kate Olsen, talking to Women's Wear Daily.

Remember way back when — about 20-odd years ago in perfume years — when Sarah Jessica Parker launched Lovely, and everyone was talking about exactly which perfume oils it was based on? It was the first thing I thought of when I smelled Nirvana Black and Nirvana White, the new fragrances from Mary-Kate and Ashley Olsen's Elizabeth and James lifestyle brand.  Lovely, it turned out, was inspired by Parker's own layering blend of Bonne Bell Skin Musk, Comme des Garςons Avignon and some Egyptian Musk oil she bought from a street vendor, but as translated into something marketable by Coty, Lovely was far tamer and more wearable than you might have expected from the original mix.

The twins reportedly spent two years working with perfumer Pierre Negrin to develop Nirvana Black, which is meant to be a "sensual woody scent" with violet, sandalwood and vanilla. What it is, basically, is a dark sandalwood musk. There's a quick whoosh of spiced warm fruit in the opening, then it's very smooth, and much darker and warmer than you'd expect from the description — it smells like there are other heavier woody notes in the mix as well. The vanilla is done with a light hand, so that there is a touch of sweetness but no more, ditto on the floral notes, which you'll hardly notice. The dry down is mildly earthy and mildly spicy, and develops a velvety finish after 30 minutes or so on skin.

The Olsens have mentioned their attraction to masculine fragrance notes, and while that usually ends up being just more PR nonsense, in this case it rings true: a man could easily wear Nirvana Black, and while the early reviews at Sephora are quite positive, I'm going to be very surprised if some women don't find it too masculine to wear.

Verdict: I liked Nirvana Black. Would I buy it? Well, no. There are already plenty of dark woody fragrances available already, and many of them are made with higher quality materials than Nirvana Black (Tom Ford Oud Wood came to mind right away). But I'm impressed, and I wouldn't be at all surprised if Nirvana Black is way closer in spirit to what Sarah Jessica Parker originally had in mind when she started down the path with Coty. What ever happened to that unisex fragrance she was going to do, anyway?

The decision to do a second fragrance reportedly did not come until they were nearly done developing Nirvana Black, and then Nirvana White was whipped up relatively quickly in collaboration with perfumer Honorine Blanc. It's described as "a musky floral fragrance with peony, muguet and musk", and I expected it to be much lighter than Nirvana Black, but it's not exactly that. It's a heavy woody musk, not as dark as Nirvana Black, with some fresh but loud florals + citrus on top, and I found the opening both screechy and dryer-sheet-ish. The dry down is softer, but it's still not what I'd call a light fragrance. And the musk in both Nirvana Black and Nirvana White is persistent: I can still smell them on skin 24 hours and a shower later.

Verdict: I did not like Nirvana White at all, although I did like it much better after it had calmed for an hour or so on skin. I tried layering it with Nirvana Black — they do advertise these as layerable, not that you need permission — but that just ruined the Nirvana Black. Still, if I had to guess, I'd pick Nirvana White as the one that will sell the most.

And the quick poll, just for fun: you are going to release your own fragrance, based on a layering blend of existing products. You can pick up to 3 products, but at least one of them has to be cheap (let's say under $25). What will your fragrance choices be? 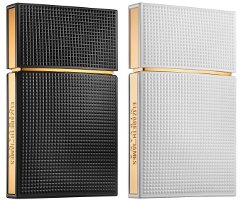 Elizabeth and James Nirvana Black and Nirvana White debuted last week at Sephora, where they apparently sold out in a couple days. The official launch is not until January, so presumably this was just a sort of preview. When they're back in stock, the 50 ml Eau de Parfum is $75, there are reportedly 30 ml and rollerball sizes still to come.