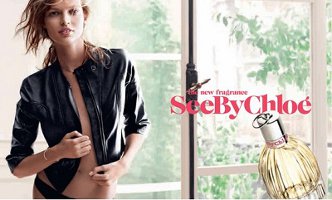 a breath of perfume, an intriguing personality…draped in the natural elegance of her well-known sister, the see by chloé girl twirls. instinctively playful, smiling, immersed in the moment… urban, self-confident, she arouses the unexpected and cultivates contrasts. assertive, seductive, cheerful, hers is a natural smile.

See By Chloé embodies femininity while blending masculine codes in an urban-chic way. This fragrance captures the audaciousness and strong personality of the Chloé woman.1

See by Chloé is the Chloé brand's youth-oriented diffusion line, which probably tells you much of what you need to know about its new eponymous fragrance: "the target user is 18 to 30 years old with an mischievous, rock ’n’ roll edge."2 From the video advertising, I would have guessed something closer to 15 to 18, but then, my rock 'n roll edge has probably long since worn away — if you're anywhere near the target age, do tell me if you liked the commercials (I found them a turnoff), and do the clothes in the videos appeal to you (ditto)?

The modern Chloé fragrance brand has been a mixed bag so far. The 2005 comeback fragrance, Chloé, was a huge seller, but I'm not the only perfumista still scratching my head over its popularity. I did like last year's L'Eau de Chloé flanker, and I'm a fan of the 2010 pillar, Love, Chloé. See by Chloé, in my ranking, ends up somewhere in the middle: I don't much care about it either way.

It starts with a crisp apple-y fruit cocktail, and dries down to a soft apple-y floral over a pale woody musk (the notes: bergamot, apple blossom, jasmine, ylang ylang, sandalwood, musk and vanilla). It's sweetish, but too mellow to overwhelm, and clean, but again, in a quiet way — the base vaguely (but no more than vaguely) reminds me of the 2007 version of Chloé, but too quiet to annoy. Despite the lingering apple-ish notes, I would have pegged it as a soft floral rather than a fruity floral. It doesn't change all that much after the first 30 minutes, but it does take on a warmer, slightly spicy tone in the far dry down. The vanilla is mild; it never approaches anything like gourmand status.

See by Chloé smells younger and more modern than Chloé, and like many recent young and modern perfumes, it also smells a bit like shampoo. And, as is also the current trend, it's mostly harmless in a pleasant, office-friendly sort of way — all that "audaciousness and strong personality of the Chloé woman" will have to emanate from elsewhere, I'm afraid. It might be the 2013 version of Marc Jacobs Daisy (2007) or Gucci Flora (2009), although I personally found both of those more charming than See by Chloé. I had a hard time working up any strong feelings about it at all, but will note that as is often the case, online reviews at the stores are largely positive verging on glowing, and Victoria at Bois de Jasmin liked it better than I did too. And she's right about the bottle — it's quite cute. 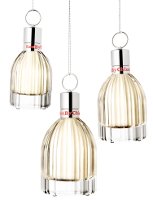 See by Chloé is available in 30, 50 and 75 ml Eau de Parfum and in matching body products. It was developed by perfumer Michel Almairac (who also worked on the 2007 Chloé and L'Eau de Chloé).

1. First quote via the press materials, second quote via Sephora. And no, there is absolutely nothing masculine about See by Chloé.