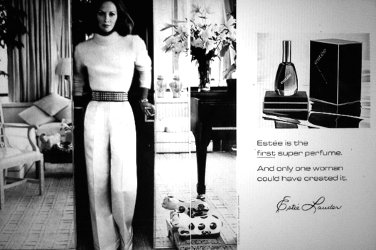 In the documentary Iris, the stylish 93-year-old Iris Apfel says something close to, “I don’t like pretty. I have no use for pretty. I know people don’t agree with me, but there you have it.” The camera lingers uncomfortably long on her. She finally turns away. There’s nothing pretty about Iris Apfel, but her marvelous excess is riveting. I bet she would love Estée Lauder Estée.

Bernard Chant created Estée, Estée Lauder’s second fragrance after Youth Dew. Estée launched in 1968. Its notes include jasmine, rose, muguet, coriander, ylang ylang, orris, sandalwood and moss. Those notes sound mild and “pretty,” but wearing Estée is like biting into a fresh kumquat. For a second or two you think you’ve made a dire mistake, but then the kumquat’s threatening tang turns into delicious fruit.

Similarly, at first on skin, Estée is a thunderhead of aldehydes with a foghorn of oakmoss sounding below it. It’s amazing how a tiny spritz of liquid can whip up such a wild storm. At this point, Estée is big — potentially overwhelming — and it’s hard to see if there’s a perfume in there. But after a few minutes, orange flower rises to take over for the fading buzz of the aldehydes, and the fragrance’s calm, slightly spicy floral heart appears. The storm is over, and Estée becomes a vaguely soapy, velvety soft floral perfume with an intriguing hint of coriander. Oakmoss still rumbles in the background, but now Estée has left the stage at the opera and is ready for a garden party. Its dry down is sweet and soft and mossy.

The Estée Lauder website says, “Once, at a party, Mrs. Lauder had noticed the light from two crystal chandeliers shimmering in a glass of champagne and thought how wonderful it would be to capture that image in a fragrance.” I’d say to put those chandeliers and champagne in the hard sparkle of Versailles’ Hall of Mirrors with summery bowls of roses, jasmine, and branches of orange flower, and the picture is complete.

If you can’t take the aldehydes in Amouage Gold Woman or Elizabeth Taylor White Diamonds, don’t bother with Estée. However, if you like Estée Lauder Knowing but wish its roses were toned down, and it was frontloaded with a little more excitement, give Estée a try. Estée is not pretty. People chasing youth and fashion won’t know what to make of it. But, like Iris, Estée has a whole lot of style. Its sparkle would be pure sunshine on the right person.

Reading reviews of Estée on the Estée Lauder website and elsewhere, it sounds like Estée's decades-long fans are not happy about recent reformulations. To complicate matters, in its latest House of Estée Lauder packaging, Estée is offered as a “Super Eau de Parfum,” which is supposed to be between a Parfum and Eau de Parfum in strength. In the recent past, it was sold as a Super Cologne and as a Pure Fragrance Spray.* For this review, I sampled Estée’s latest incarnation. I also have a bottle of the Pure Fragrance Spray with a batch number that dates it as from 2008. The fragrances smell very similar to me, except that — no doubt about it — the oakmoss in the 2008 version is dirtier and more complex. However, the newer version lasts longer on my skin. Please comment if you’ve tried any of these versions over the years and can compare them to today’s version.

Estée Lauder Estée Super Eau de Parfum spray is $50 for 50 ml and is available online and at many department stores.