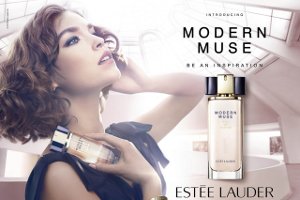 I was surprised to learn that the newly released Modern Muse was Estée Lauder's "most comprehensive women’s scent statement since the 2003 launch of Beyond Paradise"  — I would have thought 2008's Sensuous was a pretty comprehensive scent statement?1 Regardless, it is true that the house does not release pillar fragrances at any great rate, and a new one is always welcome. Here's the brand's description of the Modern Muse woman:

A Modern Muse is strong and confident, enhanced by her own intrinsic femininity and individual style. She is the heroine of her own life, always following her own instinct. She is an independent spirit who possesses a natural magnetism that draws people in, inspires them with her smile, and speaks to them without saying a word. She is memorable, a force of creative energy, a true inspiration to others.2

The fragrance is also supposed to have an innovative “dual-impression” structure featuring a Sparkling Jasmine Accord and a Sleek Woods Accord,3 but as so often happens, the innovation was pretty much lost on me. Yes, there are flowers, and yes, the jasmine is the most noticeable, but it's an intensely smoothed over sort of jasmine, and Modern Muse as a whole did not seem to develop in any startlingly different way from any other modern perfume. The jasmine is dewy and diffusive but not particularly sparkling after the first 5 seconds, and jasmine-phobes need not fear, there's nothing even slightly indolic or heady about the floral notes used here (the whole list: mandarin, tuberose, lily, honeysuckle, dewy petals, jasmine, patchouli, vanilla, amber wood and musk); indeed the whole thing is soft enough that while you may notice other flowers (especially the honeysuckle and tuberose) nothing will overwhelm.

Sleek Woods describes the dry down as well as anything else. Like the early stages, it's been smoothed over to within an inch of its life. The patchouli is a vague remembrance of something that might have once been patchouli in the wild — really, all that remains is a touch of darkness — the vanilla is subtle, the woods are polished to a velvety finish. There is plenty of clean musk — I have seen some complaints about the musk, but I did not find it overdone.

Verdict: Modern Muse is pleasant, even extremely pleasant. Like nearly everything from Estée Lauder, it's terrifically well done, and again like nearly everything from Estée Lauder, the lasting power is tremendous, even from 1 spray, which, I might add, was all I needed — Estée Lauder generally gives you your money's worth. It's easy to wear, and it's not stupid or childish. I would wear it anywhere without embarrassment. That said, it is not exactly what I'd choose to express that I was the 'heroine of my own life' — it's more like what I'd choose if I worked in an office where expressing yourself in any big way via fragrance was generally frowned upon, but I still wanted to smell nice.

Many perfumistas thought Sensuous was too sweet, but I know I'm not the only one that bought a small bottle. Modern Muse may sell like gangbusters, but I'm going to be very surprised if it is adopted by any huge number of perfumistas — it's just too tame.

As of today, there are two reviews for Modern Muse on Nordstrom, and they fall neatly into opposite extremes:

It reminds me of old ladies sitting around playing canasta all day.

It's fierce, flirty , and fantastic !!!!!! I feel so sexy and like a real women should.

So, you will have to take my verdict of 'tame' with a grain of salt, as always. 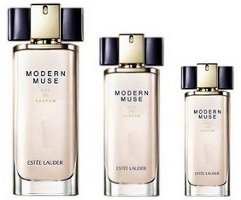