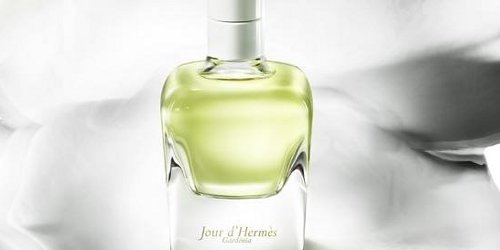 Jour d'Hermès Gardénia is new from Hermès, and since I was charmed by the original Jour d'Hermès, and even more charmed by Jour D'Hermès Absolu, (and yes, longtime readers know I am a fan of the brand in general) of course I wanted to try it. It helps, of course, that I also love gardenia.

A quick recap: Jour d'Hermès was meant to be gardenia and sweet pea, and the Absolu was gardenia and jasmine. To my untrained nose, they were both abstract bouquets, of the dewy-springtime variety, with the Absolu a bit more floral than the regular. I expected about the same of Jour d'Hermès Gardénia, which promised gardenia, rose and jasmine. Nope. This time, there's gardenia, and rose, and jasmine. What I called a 'leafy spring bouquet' in the original is now a fuller, headier mix — for Hermès, mind you. What is heady for Hermès would not pass muster over at Tom Ford.

The opening is crisp light citrus, without the heavy grapefruit of Absolu. It is overtaken, almost immediately, by the floral notes, which smell odd, almost smoky, for about 90 seconds before resolving into something more like flowers. It is still a mixed bouquet, but early on, heaviest on the gardenia: there is a short window of time (maybe 15 or 20 minutes?) in which I think someone might smell it blind and said, ah, a gardenia fragrance.1 At any rate the gardenia, while heavier than I expected, is still, for gardenia, dewy and clean: no indoles, no mushroom-y growth underneath. Instead, Jour d'Hermès Gardénia has a definite murky-green-water undertone which I could not make up my mind about, and when there was some discussion of swampwater in the comments to Tuesday's review of Penhaligon's Ostara, I thought of Jour d'Hermès Gardénia.

Verdict: Jour d'Hermès Gardénia surprised me by being so much what it said it would be, and then I surprised myself by not loving it on the spot — even during the early stages, when it still has some life to it. It is pretty, but the regular version is prettier, and the Absolu prettier still.3 I may come around to it, but I don't think I'll ever like it as well as the first two iterations. I am very much looking forward to hearing other opinions; please comment if you've tried it!

1. Wearing Jour d'Hermès Gardénia next to the regular Jour also made the 'gardenia facet' in that one more obvious. Or, I'm dreaming.

2. I did NOT try this test with Le Jardin de Monsieur Li, but I doubt it would make much of a showing at 2 hours either.