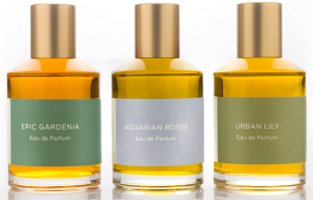 And I was extra extra curious because I was keeping my fingers crossed that Epic Gardenia would turn out to be a reprise of their gorgeous but gone Lady Day fragrance. Alas, no: as March has already pointed out at Perfume Posse, it's no such thing. The top notes are a bit heady and indolic, with a strong undercurrent of green, but that stage doesn't last long; after that, it's nearly but not quite sheer, and the "gardenia" — bearing in mind that gardenia is very difficult to extract, and so this perfume, like most gardenia perfumes, doesn't contain any "real" gardenia — is a bit less gardenia-ish and a bit more mixed jasmine-ish floral. The base is a slightly earthy plant-based musk. Gardenia in perfume rarely lasts so there's no point in going on about it: that's just how it is. Lady Day makes up for it with a gorgeous, long-lasting sandalwood dry down. Epic Gardenia, while it goes right on being pretty (and has reasonably good lasting power), simply doesn't hold my interest in the same way, although I'd probably have liked it better if I hadn't tried it next to Lady Day. If you're not pining for Lady Day, do try Epic Gardenia; if you already have, do comment.

Aquarian Roses is the only one of the trio that is overtly unisex. It's sharply green and herbal in the opening (the Strange Invisible Perfumes description: "Crisp aquatic notes of wild roses brighten a warm sea of marjoram and sandalwood") and only slightly less sharp in the dry down: this is an extremely vegetal fragrance. The rose is hardly noticeable in the early stages; later, it's a bit stronger, but it isn't a rose-heavy perfume at any point, and it doesn't change dramatically after the first 20 minutes or so. In style and feeling, it reminded me very much of the line's Musc Botanique, in fact, I'm pretty sure Kevin would hate this one just as much as he hated Musc Botanique, and likewise I am hard pressed to pick which one I like best: they're both wonderful, and the lasting power is excellent. If I could have one full bottle from the trio, this would be my choice.

From what little I've read, Urban Lily seems to be the early favorite. Like gardenia, lily of the valley does not lend itself to extraction, so this is another stylized interpretation; still, I think I'm the odd one out here: I simply don't get it. Urban Lily smelled vaguely of "green" and "flowers" (nothing like lily of the valley to my nose, but pretty enough) to me for about 15 minutes, then it smelled like not much of anything other than vague, nearly bland flowers over a paler version of the plant musk from Epic Gardenia. March talked about how "an hour or two later it morphs into an utterly different scent, a honey-hay-beeswax smell with a hint of something peat/leather like narcissus". I gave Urban Lily five tries but it stubbornly refused to morph into anything so interesting as that — perhaps there is something in the dry down that I can't smell? It was easily my least favorite of the three.